Once-every-three-days Covid testing continues in Shenzhen, but we seem to be going through the motions. We are now up to twenty cotton swabs per test and many have noticed that the swabbing isn’t as “sincere 认真” as it used to be. Moreover, although it is possible to go an extra day or two without testing, however, after the fifth day, you have to go to a designated test station. There are, of course, differences between stations depending on location. Some health workers still jab, while others seem more careful. But. Regardless if the hand that pokes the throat is strong or gentle, testing at all the stations that I’ve used seems so cursory. Even when boarding the metro (the buses never checked covid passports), the security guards look at the QR code and just wave a thermometer in one’s general direction, begging the question: what purpose are these tests serving? (Other than the ongoing transfer of wealth to biotech enterprises.)

Dark sci-fi paranoia du jour: All this bio-monitoring has me wondering about the kinds of data that are being collected, how it is being stored, and the reliance on cellphones for this system to work. Indeed, the entire system hinges on the belief of direct link between an individual and a particular phone, which is true in my case. But. Easily hacked, I would think. If that was your goal and/or skillset. It seems to me that if the goal is bio-surveillance, then the logical step would be to chip us all, guaranteeing that the data you’re seeing is linked to a specific body. Although, there are no doubt technologies at play I don’t know about. Kind of like gene-editing cockroaches, we could be gene-edited to transmit selected information. And on dark and rainy nights, these ideas don’t even feel fanciful, but rather inevitable. Sigh. 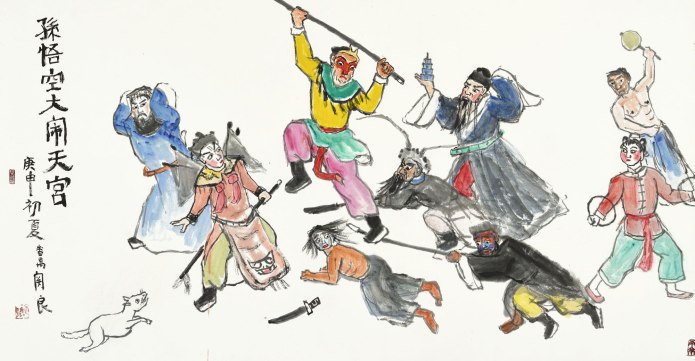 A speculative what if: what if the Covid had happened during the late Qing? Would there have been discussions about loosing the will of heaven? Would we be having more serious conversations about ecological responsibility? And would we maybe understand all this Covid testing and infrastructure as some kind of attempt to suppress the expression of heaven’s mandate?

I know, kind of conspiracy theory-esque. But. Also, kind of sci-fi in the speculative way of questions such as: “how does science and technology reshape political ecologies within and against historical cultures?” Indeed, the ongoing management of the pandemic after pandemic’s end has my mind following Sun Wukong into imaginative black holes that aren’t explicitly Euro-North American, but rather all about the mandate of heaven 天命.

END_OF_DOCUMENT_TOKEN_TO_BE_REPLACED

Yesterday I spoke with a cabbie about the future. He was excited to learn that I hold a US American passport, and quickly reassured me that even if many Chinese people dislike the USA and its residents, he felt otherwise. He wants China to become more democratic and for more voices to be heard in political conversations. He emphasized that presently China only has one voice, making everybody else what we in the US would call “sock puppets” and in China are sometimes called “marionettes” or 傀儡. He also felt that Shenzhen’s housing market made it impossible for anyone not rich to purchase a house and make a life for themselves, so why not “lay down” 躺平. If you have a place to lay your head and enough to eat, why bother with marriage and children?

END_OF_DOCUMENT_TOKEN_TO_BE_REPLACED

This is a serious question. During times of mass corona-testing, dental services have been closed and dentists and their assistants redeployed to people test stations. But this information hasn’t been made public. Instead, you only discover that dental services have been suspended if you need your teeth checked, can’t get an appointment, and then someone explains the situation to you. Otherwise, there’s just a black hole where the dentist used to be.

Both in China and abroad, much ink and digital text has been dedicated to extreme cases of people being unable to get emergency medical care. However, the redeployment of dental workers illustrates how regular healthcare has been (indefinitely? until further notice?) suspended in order to mobilize workers to meet the need for personal to give tests. Annual check-ups can’t be booked, for example, if your dentist is busy swabbing throats instead of filling cavities. This situation illustrates one of the challenges to navigating Shenzhen’s current management of the omicron outbreak–there have been no comprehensive announcements of how city resources have been re-deployed to achieve zero-Covid. This means that you find out what’s been closed or redeployed through unexpected encounters with a new normal that has not been formally acknowledged.

END_OF_DOCUMENT_TOKEN_TO_BE_REPLACED

Borders are breached, daily. Breached despite guards, despite fences, despite and through raging anger, which accumulates like garbage, no longer hidden from sight. Stupid plastic bottles, we scream, 打！As if the bottle we threw away yesterday was the cause of our suffering.

Anyway, images from a Shenzhen, where some imagine themselves as under siege, and others find themselves working even harder (yes, the city is involuted) to keep the boat steady.

END_OF_DOCUMENT_TOKEN_TO_BE_REPLACED

This past week, the story of Xiao Huamei, the woman who gave birth to eight children under suspicious circumstances has unleashed other stories about human trafficking in rural China and the complicity of low-level government officials, who have overlooked obvious violations of Chinese law to facilitate…what? Chinese public opinion has focused on the Xuzhou government’s inept handling of the case, outraged at their indifference to the rights of women and children. Family life, they rightly assume, should be a safe place for all members. I’ve been thinking the question is worthy of a dissertation: Why has it been so important for marginalized rural men to marry that local and regional officials, not to mention family and friends, have ignored the illegality of these households for decades? Xiao Huamei’s videotaped answer is quite clear, “This world doesn’t want us.”

My inner North Americanwants to snark: are these incels with Chinese characteristics? But this is bitter humor, a laugh that obscures as much as it reveals about cultural difference and demographic transition. On the one hand, China’s rural wife-purchasers, like North American incels seem to truly believe that they are owed a woman, albeit to satisfy different desires. And in both China and North America questions of women’s roles continue to be framed in terms of men’s needs. Sigh.

On the other hand, these Chinese and north American forms of male chauvinism and misogyny are cultivated in and deployed to sustain different communities. In rural China, for example, the network of traffickers who have supplied women and the family, friends and officials who have made sure (both actively and through negligence) women don’t escape share beliefs about the filial obligation to continue family lines, which are traced from father to son. In these narratives, women are means to masculine ends–the birth of a son and social coming of age. It is a generalized value judgement, held by many who oppose human trafficking. For example, rural wives who don’t give birth are known as “hens who can’t lay (下不了鸡蛋的).” It is an ugly, dismissive label that emphasizes a woman’s reproductive function without or despite her rights as a human being. In contrast, participants in north American online forums where young men are groomed and radicalized share ideas about how sexual intercourse makes men out of boys. In these narratives, women are means to masculine ends–by ejaculating into a vagina a boy comes of age. It is also a generalized value judgement, held even by those who maintain that consent is fundamental to healthy sexual relations. A north American woman, for example, who doesn’t put out is known as a bitch. And yes, the short linguistic jump from not putting out to being put down hovers at the tips of our collective tongues. Incels, many now suggest, are terrorist threats, even as Chinese intellectuals and urban residents continue to frame the nation’s problems in terms of improving the quality of its rural population.

END_OF_DOCUMENT_TOKEN_TO_BE_REPLACED 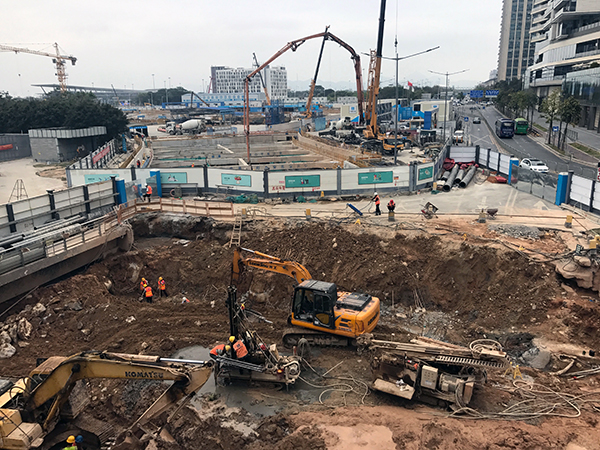 Just when I thought it was safe to go out in public without having to refute the fishing village myth and the city’s nets-to-riches origins, I attended a meeting organized for foreigners visiting Shenzhen. The host (from England via Beijing) asked me point blank to talk about the city that used to be a fishing village. Clearly, my efforts to get a more accurate first impression into the world have not been as successful as I had hoped. Sigh.

There was, however, an unexpected silver line to this encounter; I’ve streamlined my takedown!

END_OF_DOCUMENT_TOKEN_TO_BE_REPLACED

This is a speculative post about something that has been niggling at the back of my mind this past year. Or at least since I started walking around Shenzhen after COVID restrictions lifted circa April 2020; I think the era of urban villages in Shenzhen has ended.

END_OF_DOCUMENT_TOKEN_TO_BE_REPLACED 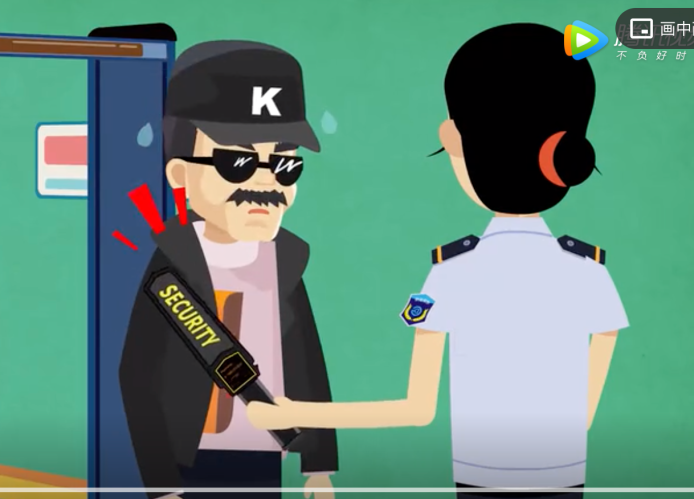 Anyway, I’ve been thinking about why the quarantine in Shenzhen has been so smooth and this is what I’ve come up with: the state is using its anti-terrorist infrastructure to control population movement and combat the spread 2019-nCoV. END_OF_DOCUMENT_TOKEN_TO_BE_REPLACED