At dinner last night a friend asked me, “If you had to choose between living in a 50 story building or an urban village walk-up, where would you live?”

This question illustrates the kind of double bind thinking that current debates about urban villages generate. As posed, the question compels us to choose between either high end futurism or unsanitary crowded settlements. But all too often the question itself becomes rhetorical justification for ignoring other examples of more successful urbanization. What’s more, the question also blinds us to what we can learn from the  tight organization and convenience of the villages, while using high tech knowledge and skills to imagine low-rise, more environmentally friendly settlements. END_OF_DOCUMENT_TOKEN_TO_BE_REPLACED

Yesterday evening, Tianmian Industries Ltd (田面实业股份有限公司) celebrated 20 years of incorporation, simultaneously confirming the group’s new status as a corporation and the corporation’s status as the continuation of Tianmian Village. The celebration achieved this sense of historic continuity through the sequencing of socialist and traditional customs, including the presentation of and speeches by Tianmian, Fuhua Precinct, and Futian District leaders, which was followed by singing and dancing performances, a demonstration of Bruce Lee style kongfu by one of Bruce Lee’s students, and pencai, a local specialty that is only eaten at collective ceremonies. The speeches and performances took place on a stage in the vip area, while two large LED screens had been set up throughout the common area so that guests could watch the entertainment while eating.

Another important ceremonial function was to demarcate borders both within Tianmian and between Tianmian and outside communities. The 137-table event occupied  most of the main road into the village (directly off Shennan Road) as well as adjacent public areas, dividing Tianmian into two sections: the ceremony area and the rest of the neighborhood. Importantly, only Tianmian Ltd has the authority to cordon off public areas for private ceremonies. The ceremony area itself was subdivided into a vip area for leaders, their families and guests and a common area for Tianmian stockholders, their families and guests. Tianmian guards prevented non-guests from passing the red cordons.

Rituals such as these and the concomitant right to occupy public space are perhaps why we continue to speak of Tianmian Village as a village. In point of fact, we were celebrating the dissolution of Tianmian Village and its reconstitution as Tianmian Ltd. In ritual terms, however, the celebration clearly established Tianmian Village as the host and hegemonic subject of this territory and Tianmian Ltd as the contemporary manifestation of the village. What’s more, throughout the evening the gaze of outsiders — many of whom live in Tianmian housing stock — reinforced the sense of Tianmian as a vibrant and recognizable collectivity.

These rituals are particularly important in Tianmian because the corporation has not built traditional village buildings, such as an ancestral hall or a temple. In obvious contrast to Tianmian’s appropriation of public space, when larger village-corporations hold pencai ceremonies, they set their tables in designated village plazas that are surrounded by traditional buildings. In Xiasha, for example, the large village plaza includes an ancestral hall, a temple, a public theater, a traditional garden, and a path to the Xiasha Museum. Consequently, where Xiasha relies not only on ritual, but also on the built environment to reinforce communal solidarity, Tianmian’s village identity remains as such primarily through what is commonly called “non-material culture (非物质文化)”, or rituals.

It will be interesting to see, say in twenty or fifty years, how strong Tianmian’s sense of village solidarity remains and to compare that solidarity to that of a village like Xiasha, where the construction of village architecture sets the stage for village rituals. In other words, although Shenzhen has been seen as a laboratory for economic and social experimentation, we might specify further, and watch the ongoing reconstruction of traditional solidarities despite and within the maelstrom of modernization. Impressions from Tianmian’s 20th anniversary celebration, below.

Has been a while since I last visited Tianmian. In the interim, the biggest changes have been to the relentlessly upgrading lay of the land. In the north, renovations to the outer factories have been completed and there are now higher end restaurants and several chains. In the west, the border between New Tianmian Village and the City of Design has been eliminated so that people now pass freely from one section to the other, even though the aesthetics suggest a clear distinction between office workers in Design and New Villagers. To the east, the former red line of the 1980 SEZ at the Shanghai hotel continues to transform itself higher and bigger as Tianmian rents remain higher than service wages in neighborhoods diners, convenience shops, and beauty parlors.

The Futian River has been channelized into a rainwater runoff and waste streams. The rainwater flows above ground, creating a walking area, which winds through the Municipality’s central park. The waste stream flows through underground tubes, unseen and unnoticed, unless one manages to the wastewater treatment center further downstream. The effect of separating the streams has been to create a cleaner environment, literally burying the problem.

Now, whether or not a Shenzhen river can be separated into rainwater runoff and wastewater tubes depends on the level of industrialization upstream. Thus, for example, the City efficiently handled the relatively underdeveloped Yantian River (in the East), while remains undecided about what to do with the Buji River. Consequently, lest we forget that water quality remains an issue throughout the city, upon crossing the silvery clean Futian River into Tianmian, one encounters literally hundreds of plastic bottles of drinking water.

About a year ago, I had the privilege of participating in Vexed Urbanism: A Symposium on Design and the Social at The New School. I contributed Tianmian: East West South North an image poem that mapped four of Shenzhen’s formative ideologies along east-west and north-south axes.  In this piece, I aim to show – quite literally – how landscape is never simply place, but also and always a symbolically organized world, a cosmos. Thus, Tianmianillustrates how it is possible to read not only Shenzhen’s history, but also the values that have informed the city’s construction in the lay of the land, the placement of a building, and movements in and out of an urban village. 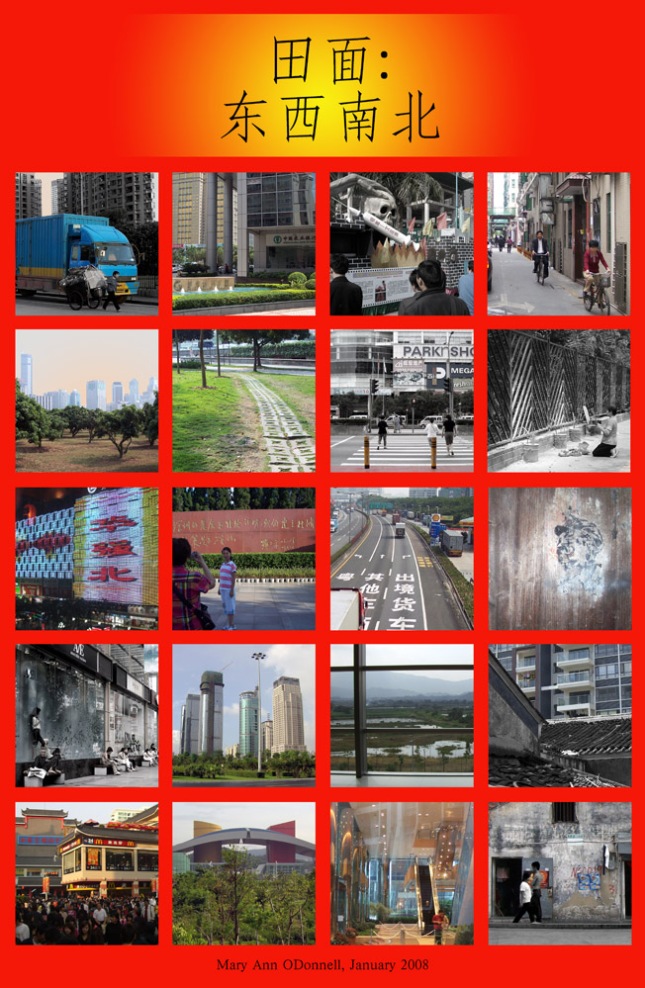 these past two weeks, it has rained in shenzhen and the rest of the delta. on friday the 13th (!), the rains flooded baoan district, killed six, and delayed airflights. songgang was the worst hit. that night, storm water also pooled throughout the city and public transportation stopped, causing hundreds to wade home.

in between the downpours, however, the cloud formations have been stunning. pictures from tianmian, dongmen (hubei new village), huaqiangbei, and houhai. even when you least expect it, expect it. shenzheners will find another corner to light up; even tianmian glows at night. so, yesterday was field day at green oasis. i enjoy field day for many reasons, not least of which is that field day makes the students happy, and happy students bring joy. nevertheless, what struck me during field day was the diversity of our student body.

facts that speak to the ongoing globalization of shenzhen. 49% our students come from outside the mainland (including taiwan and hong kong); 25% come from outside greater china (india and korea being the two largest non-chinese populations). for years, people have spoken of shenzhen as a city of immigrants (移民城市). however, what they meant by “immigrant” was “from other parts of the province/country” or simply “outsiders (外地人).” now the immigration situation isn’t so straightforward. most of these students won’t become chinese nationals. however, their parents work here for companies that are clearly here for the long-term. moreover, they have chosen to place their children in a chinese school in order to insure that these children will grow up into bi-cultural (mandarin-speaking) citizens.

this model is obviously different from the local chinese model, which educates with an eye toward helping chinese students become chinese citizens. it is also a very different model from the colonial model of an “international” school, which has taught euro-american or curriculums with an eye toward going to university in the u.s. or europe. those children live in china, but are not part of china; indeed, there is no intention to make them part of china. instead, the green oasis model entails educating international children to be part of china, without becoming chinese nationals. at any rate, we now have students whose mandarin is better than their (native) russian or spanish or korean or cantonese…

in many ways, the green oasis model echoes the larger chinese model of sojourning, where people (outsiders) live in other cities, but retain hometown identities. i’m beginning to think that sojourning increasingly enables chinese people to weave foreigners into the fabric of shenzhen life. so that the questions “where is your hometown (你的老家在哪里？)” and “what country are you from (你是哪个国家的人？)” become functionally equivalent in terms of social mapping. which is to say, that for many chinese, especially students, the u.s. and korea and india are no longer as foreign as they used to be.

field day pictures, which in addition to sharing childhood smiles, also illustrate how childhood has globalized with chinese characteristics… as part of the push for an economy based on “culture”, the city has chosen tianmian’s factory area to be a center for industrial design. so factory buildings from the mid 80s are now being upgraded to office space. some “before” pictures. when the new look is revealed, i’ll post “after” pictures.