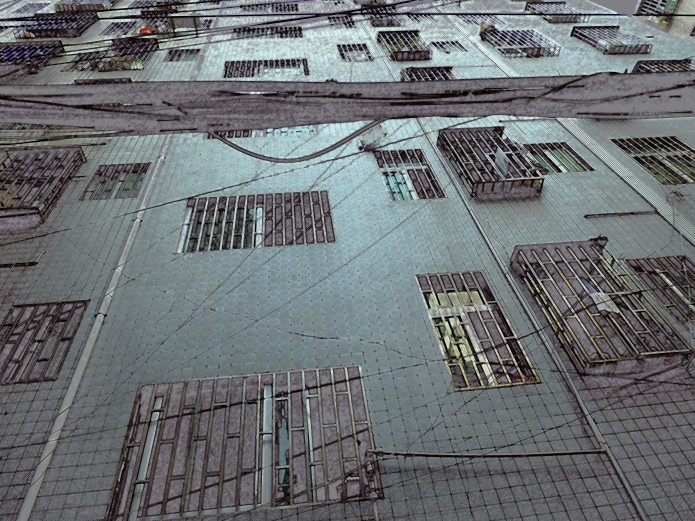 At dinner last night a friend asked me, “If you had to choose between living in a 50 story building or an urban village walk-up, where would you live?”

This question illustrates the kind of double bind thinking that current debates about urban villages generate. As posed, the question compels us to choose between either high end futurism or unsanitary crowded settlements. But all too often the question itself becomes rhetorical justification for ignoring other examples of more successful urbanization. What’s more, the question also blinds us to what we can learn from the  tight organization and convenience of the villages, while using high tech knowledge and skills to imagine low-rise, more environmentally friendly settlements.

I  have lived in or near an urban village for my entire sojourn in Shenzhen. When I first came in 1995, for example, I rented a dorm room from a villager in Houhai, which used to be accessible to the Shenzhen University campus by way of a small road. I then moved to work unit housing on Old {Nantou} Street (today Nanxin Road), which abutted the string of villages that stretched from the southern gate of Old Nantou Town and then via Nanshan Village into Shekou.  Even when I rented an apartment on the 29th floor of a tower Lanwan Bandao Estates, I actually lived in an urban village. The elevator connected my apartment to a garage and a supermarket. If I wanted upscale dining, pampering, or to get to work, I would have to drive or take a bus elsewhere because the estates did not connect to an upscale mall. Instead, the supermarket opened into Shazui New Village.

Of course, there are economic reasons why an estimate half of Shenzhen’s population lives throughout the villages — the villages are not only significantly cheaper than any of the upscale estates, but also cheaper and more convenient than early work unit compounds. I like my current late 80s work unit housing, for example, because it has a courtyard (with trees and migratory birds!), low buildings and opens into a relatively narrow street. In terms of non-village housing, at 3,200 rmb a month, our rent is low. However, it is higher than rents in a village complex, where smaller units can be had for 1,700. This is a difference that makes a difference when most service workers and manual laborers are making somewhere between 2 and 3,000 a month. What’s more, the prices of food in a supermarket can be 30 to 50% more expensive than it is in a stall on a village market street. And when you leave the inner districts for the less convenient outer districts, the cost of living drops dramatically. Sociological research refers to these kinds of transitional urban spaces as gateways, where rural migrants can settle, accumulate capital and social resources to become a citizen, possibly purchasing a condo in a gated community.

More importantly, however, I think there is a latent urbanity to traditional Chinese village settlement patterns. Traditionally, the villages were spread out over Bao’an County, within walking distance to each other. The actual settlement consisted of clusters of housing surrounded by fields and orchards, a dock if on the coast. Villages held periodic markets, while for daily marketing and larger purchases, there were permanent markets in small towns. These towns were about a half day’s walk from each other, but no more than a two or three hours walk from the smaller villages. After the establishment of Shenzhen, housing development and industrial parks grew up near these original settlements to take advantage of the infrastructure that was already in place. Very quickly, periodic markets became daily markets and then commercial streets. While the towns — especially in the outer districts — have developed commercial streets. In fact, today the most lively streets in any urban village grew up out of the periodic market system, extending and elaborating traditional layouts.

It is my hope that research in and around Shenzhen — its mainstream developments, its urban villages, and its alternative remnants — contributes to conversations that help us out of double bind urbanism, both here and elsewhere. As an urbanizing planet we need to imagine new cities, which both respect the world we’ve inherited and orient us toward a less divisive future.