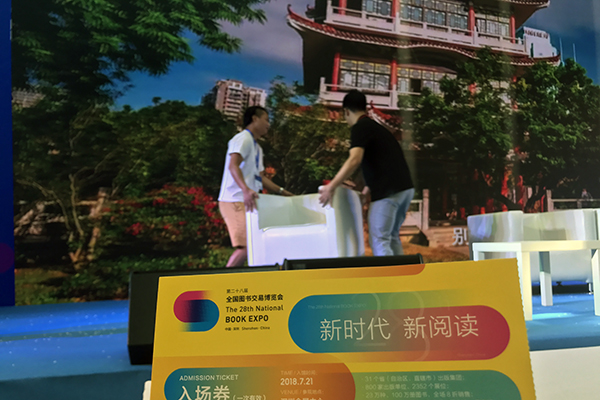 On Saturday, July 21, I participated in the launch of A General History of Shenzhen (深圳通史) at China’s 28th National Book Expo. We gathered to honor archeologist Zhang Yibin, who has spent over thirty years of his life documenting the shards and towers of Shenzhen. He has contextualized these bits and pieces of material culture within and against local gazetteers and academic research, providing us with a rough timeline of the past 7,000 years. So, now we have an official history that we can begin deconstructing. Who knows? We may actually move beyond the fishing myth and our investment in imagining “normal history” as the history of boomtowns and capitalist accumulation.

And here’s the link, “Arrival Shenzhen”, episode 3 in the series.

In the aftermath of Kunming, the military armed and in groups of three can be seen at the odd subway station. The machine guns and bullet proof vests are disconcerting and, given the extreme lack of news, feel like overcompensation. If the situation really is this fraught, why haven’t we heard anything? And if it’s not, why the anti-terrorist performance?

In less distressing news, I finally got a copy of 深圳记忆 (Shenzhen Memory) by Nan Zhaoxu (南兆旭). It is an archive of Shenzhen pictures and stories from Liberation to the present. It’s organized by theme, such as “love” and then offers a selection of materials that highlight the vast transformation that has occurred. Under “love”, for example, Nan Zhaoxu has filed a 1954 article from the Bao’an Daily on the topic “How to find a spouse”. In contrast, in 2006 the Shenzhen Women’s Federation confirmed that Shenzhen had the highest number of divorces in the country.

I also snagged a copy of 深圳拓荒人 (Shenzhen Pioneers), which tells the story of the engineering corps that put in most of the City’s basic infrastructure. This history interests for many reasons, but also because I hadn’t realized that when the 20,000 odd strong brigades of engineering soldiers came in, the doubled the population in the Luohu area. Interesting way to think of demilitarizing the border by having soldiers dig trenches for civilian use. In this sense, the book also introduces the companies that arose out of the restructured military, including the rise of Huawei and it’s links to this transformation.

So, yesterday afternoon we read “Crossroads” onstage at the Mizzou Jesse Wrench Memorial Auditorium. Despite snow days and ice and broken cars, the show went on and Fat Bird had a great time. “Crossroads” is an early play by Yang Qian that looks a the moral confusion and disfunction that have shaped and been shaped by Shenzhen boomtimes. Impressions, below: