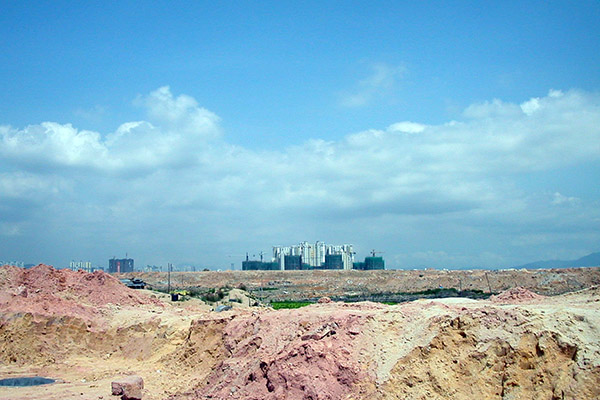 The next installment in the Myriad Transformations, “City on the Fill” is a series of riffs on land reclamation, both as an important feature of Shenzhen’s cultural ecology and as a metaphor for the replacement of southern Chinese culture with northern norms.

This image of the Shenzhen Bay coastline was taken behind the south gate of Shenzhen University in 2002. Squatters occupied the landfill and planted small vegetable gardens and raised chickens near their houses. Most worked in the informal economy, sorting garbage, working on nearby construction sites, and cultivating the oyster and fish farms that would be shut down in 2006. Today, the water  has been reclaimed and is part of the Hi-Tech corridor that connects the Tencent Headquarters to University town via Shenzhen University, branch campuses of Hong Kong universities, and office buildings of Shenzhen and China’s top hi-tech companies. Indeed, this area was the site of the Shenzhen Maker Faire, 2015. The building under construction in the background is the Yangri Wanpan （洋日湾畔）estates, next to the Coastal City Shopping Mall complex. However, what strikes me more than the “that was then feeling” of a landscape transformed is the squatters’ clothing; even in 2002, when Shenzhen was still a manufacturing city, squatters would have difficulty finding jobs in the formal economy where appearance was part of gaining employment. 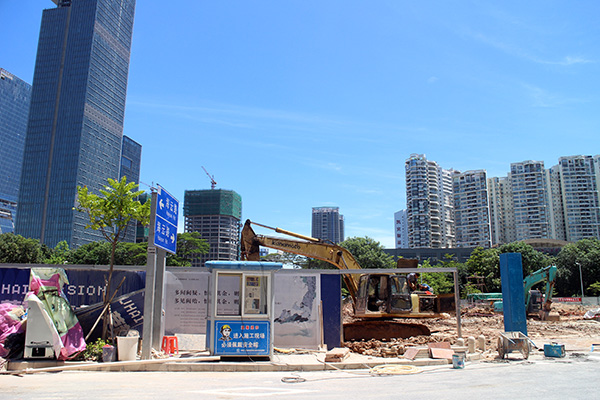 This is the Hi-Tech area, circa 2015. The white buildings in the left of the photograph comprise the Yangri Wanpan housing estates, which were under construction (and considered seafront property) in 2002. In 2015, the Hi-Tech area was the site of the Shenzhen Maker Faire, shown in the Chaihuo clip, below:

Over the past forty years, Shenzhen has relentlessly remade its coastline–from the Shekou and Yantian ports, to the bright and shiny hi-tech area in Nanshan District, to the up and coming Qianhai Area–emerging as the northern bulkhead of China’s maritime Silk Road. Most accounts of this transformation focus on architecture and new economies. In contrast, City On the Fill takes up the narrative from the perspective of how land reclamation has been a critical component to transforming local landscapes, myths, and imagined horizons.

Historically, the greater Shenzhen area (which includes Hong Kong and southeastern Huizhou) has participated in two aquatic cultural ecologies. In the west, the area was integrated into the Pearl River Delta (PRD) cultural ecology, while in the east, the area was incorporated into littoral communities that stretched along the eastern seaboard, especially Fujian. Through trade and kinship, both Shenzhen’s western and eastern coastline communities were connected to overseas Chinese and local communities in the South China Sea. Knowledge about drinking water, rivers, and the ocean was common throughout the area. These forms of “aquatic knowledge” were valued because freshwater wells, navigable rivers, and access to the ocean determined village and regional prosperity. The expression “water is wealth” captured the importance of water knowledge in the region, while the expression “what water did you grow up drinking?” was a common way of asking where a person was from.

Since the beginning of the 20th century, three infrastructure interventions aimed to diminish the relative importance of local aquatic cultural ecologies and concomitant knowledges. The construction of the KCR (1911) loosened human dependency on riparian travel and stimulated the growth of markets in the relatively underpopulated Hakka territory of Shenzhen, connecting Hong Kong to Guangzhou. In 1925, the completion of Taishan to Bao’an (at Nantou) via the Tai-Bao Road (today National Highway 107) allowed overland transportation of people and goods along the western banks of the Pearl River. Finally, the first phase of the Dongshen Waterworks Project (1963) allowed for population growth that well-exceeded local environmental capacity. Obviously, these infrastructural interventions facilitated the industrialization of Hong Kong and since 1980 have been key to the transformation of Bao’an County into Shenzhen Municipality. More importantly, however, these infrastructures draw our attention to the importance of aquatic cultural ecologies to the area, suggesting the ways in which foreigners and northern Chinese have attempted to occupy the Shenzhen-Hong Kong area by avoiding riparian trade and transportation routes and controlling access to drinking water.

In a historical nutshell, foreigners and northern Chinese have landlocked the littoral communities of Shen-Kong and in doing so not only transformed social possibility, but also reshaped the region’s cosmology. Metaphorically speaking, this transformation meant burying Tianhou / Mazu, who is still revered in South Chinese Sea cities and villages. The next chapter of The Myriad Transformations, City on the Fill attempt to make sense of this process through eight montages made during walks along and through Shenzhen’s reclaimed coastline. I first introduced this landscape in SZ8X8//The Myriad Transformations//Cut and Pastiche: Landfilled, while clicking the tag houhai reveals the extent of my obsession with land reclamation.