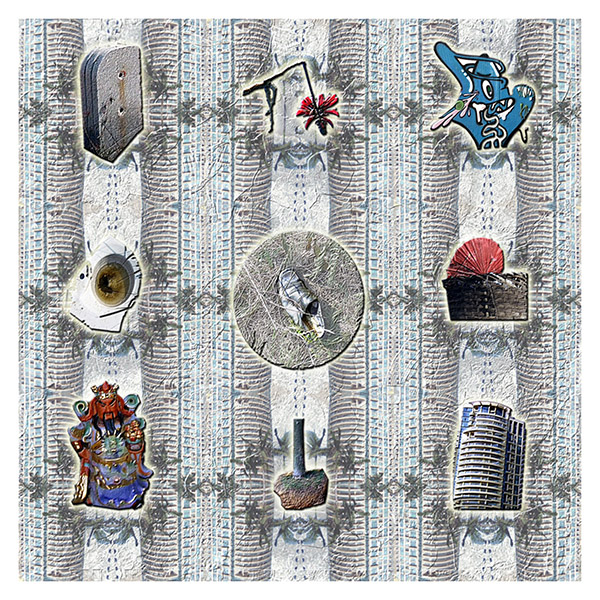 When I first moved to Shenzhen in 1995, I lived at Shenzhen University, which at the time was located on the northern banks of Shenzhen Bay and boasted oyster farming on just beyond its campus border. In fact, for the first decade that I was in Shenzhen (1995-2005), land reclamation and the reconstruction of the coastline was one of the major ongoing infrastructure projects, even as the city shifted its economic emphasis from manufacturing to innovation. So for over a decade, I walked reclaimed land. As the landfill settled, grass grew, squatters came and went, and the city itself “washed its feet and stepped on land,” an expression that was used in the 1990s to describe the transformation of farmers into urban residents. Locally, the expression referred to how local villagers left their paddies and fish ponds to become landlords, while in terms of migrants, it referred to migrant workers who left their home villages to work in factories.

My earliest landfill photos are from 2002, showing the transformation of the Shenzhen University campus from oceanfront property. There were two important landmarks in this transformation: Binhai and Houhai Roads. Translated, these roads were “Ocean Coast” and “Backwater,” respectively, each referencing Shenzhen Bay. Indeed, for many years (over a decade if memory serves), the Baishi pedestrian overpass at the intersection of Binhai and Houhai roads was an important landmark in my photo-walks.

Today, the this area is now the site of the Tencent building. As you can see, the red roof in the back of the squatter settlement is today dwarfed by glass and steel towers, while the road has been widened by removing the green strip.

This small squat was located on a strip of land that was filled from 1988-1994. By the time I arrived, the vegetable patches had already been laid out and a settlement for several families had already been built. The map below provides a rough chronology for the reclamation of the Nantou peninsula coastline. 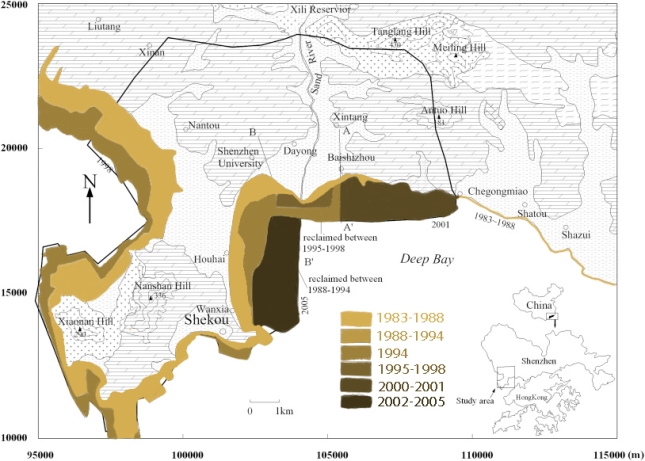 Ryoyu Kido sent me the link to Modeling the influences of land reclamation on groundwater systems: A case study in Shekou peninsula, Shenzhen, China, which includes a map of land reclamation around the Nantou Peninsula, 1983-2005. I added color. In the map you can see the historic coastline and its three iterations.

Sattelite images from 2005 show the contours of Nantou Peninsula when the reclamation projects were completed. 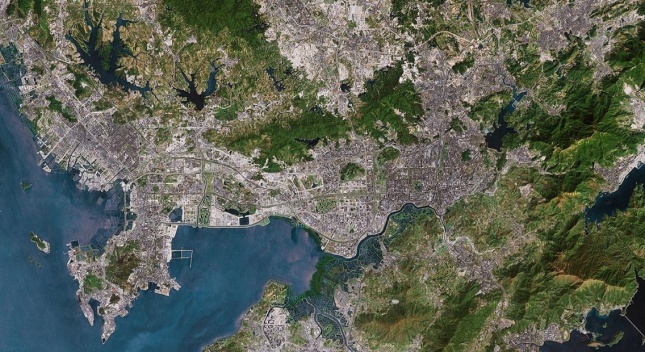 Satellite photograph of Shenzhen Bay circa 2005. Binhai Road is already in place along the northern banks of Shenzhen Bay, while the eastern Banks of the Nantou Peninsula are still being reclaimed.

Below, magnification of that map shows ongoing construction and informal occupations of reclaimed land, including large scale farming in the Qianhai area (western coastline). The red dot marks the location of the squatter farm settlement. 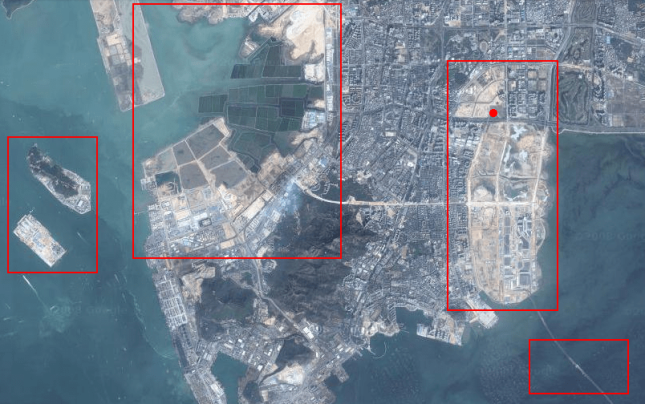 The point, of course, that even if Shenzhen’s transformations feel as if they happened “overnight” and “at the speed of a mouse click,” in point of fact this emergence has taken place over real-time in real places. Elsewhere, I have speculated that we need to understand “Shenzhen Speed” as simultaneity:

In 1980, there were roughly 2,000 villages in Shenzhen with an estimated population of 300,000 people. The villages were evenly spread out over the territory of Bao’an County. When the call to Reform and Open came, all of them simultaneously began to reconstruct their environment to take advantage of the new policy. At the same time, the State sent several thousands to the newly designated SEZ to start constructing a city. Millions followed. In this sense,”Shenzhen Speed” referred not to space-time compression through technology (a la David Harvey and others) or even neoliberal ideologies (as John Agnew has argued), but rather to the cumulative effects of many, many, many people doing the same thing (constructing low-tech buildings) simultaneously.

This is important. When thinking about what is happening in Shenzhen specifically and China more generally, we are wont to think of population in terms of markets, but not in terms of what it means for labor. However, Shenzhen continues to be built (and often demolished) by human beings. As Shenzhen has pursued innovation and courted educated elites, the city has downplayed its early reliance on the mass organization of labor. The development of land alongside Binhai and Houhai Roads examplified this formal-informal two-step of population. On the one hand, land reclamation and the construction of roads was organized at the level of the state. On the other hand, the construction of  housing estates and industrial parks (along these roads) were organized at multiple levels, by differently positioned agencies. In turn, each of these agencies relied on construction bosses to organize the workers needed to build these spaces. Meanwhile, while the land rested, squatters moved in until they were moved out.

Rather than being the “exception” to the rules of development in Shenzhen, these temporary settlements illustrate the processes through which “fast development” operate.

The images below are of squatter housing at the edge of the old new coastline in 2002, just before construction of the new new coastline began. In these images, Shenzhen’s low-tech roots are still visible, even as the first generation of high end commercial housing is emerging at what they thought would be oceanfront property.

2 thoughts on “SZ8X80105//The_Myriad_Transformations//Cut and Pastiche: Landfilled”