There is this sense or perhaps compulsion to make sense of the city through its cultural history, as if history were the whole story and not some narrative, which has been retrofitted to the needs of the moment. This is not to say that the needs of the moment are unimportant, merely to highlight that what counts as history and when history may come to count (so to speak) are themselves effects of other social processes which may or may not have anything to do with what happened, but are (nevertheless) important to understanding what we think happened.  All this to say, answering the question “how did Hakka-scapes come to the foreground of Shenzhen’s current embrace of history?” requires double think: we not only need to rummage around to figure out what happened then, but also to posit why then-and-there have been positioned at the origin of here and now. END_OF_DOCUMENT_TOKEN_TO_BE_REPLACED 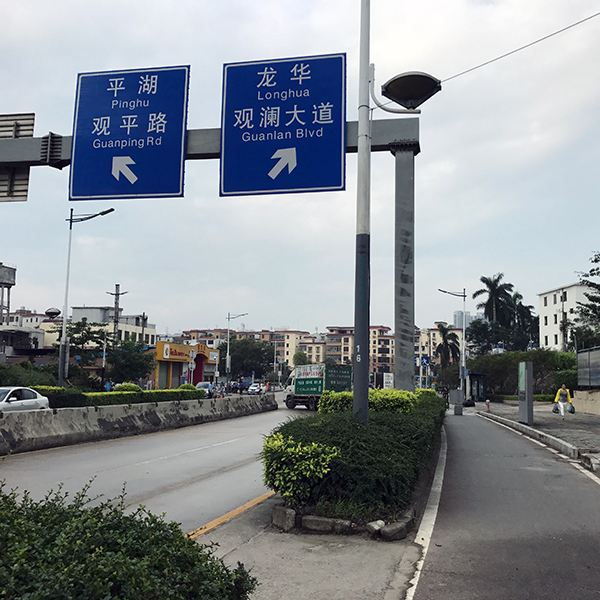 The distinction between the golf course (or “high ball field – 高球场” as it is now abbreviated) and the nearby urban villages is clearer in English than in Chinese, because the gulf course is known as Guanlan Lake High Ball Field, while the surround area is simply “Guanlan.” These fuzzy language borders matter. I know, for example, many Chinese people who use English translation to more strongly express ideas and aspirations that remain muted in Putonghua. I will be exploring these tensions–between art and craft, between hand and machine, between service and consumption, and between local and outsider–over the next two months as a participant in the Guanlan Mission Hills International Material Art Camp. Below are impressions from my first few days walking the area.

The contrasts between the inner and outer districts are not immediately apparent because they are not juxtaposed in space, but rather through time; you need to travel (at least an hour, more by public transportation) from center city to its outskirts in order to viscerally experience the lived differences between here and there. Indeed, most people don’t make the trip (unless they live in one of the new gated communities along the subway lines that transport young managers and clerks and secretary types to their offices, most likely in Futian, because close examination reveals all subway lines–especially the high-speed and direct lines–converge in the city’s center) and even then, most don’t venture beyond the lines and malls because, well, there’s no time (true) and less interest (all too true).

END_OF_DOCUMENT_TOKEN_TO_BE_REPLACED

Yesterday, Wenzi and I visited her classmate, Zhao Jiachun who works at the Guanlan Woodblock Print Base (中国观澜版画基地). Jiachun generously showed us the Base and briefly introduced its history.

Guanlan interests me for three reasons (in addition to the beautiful setting, pictures here):

Guanlan is, at the moment, a purely municipal government funded project. This points to the growing ideological importance of culture in Shenzhen’s identity – both domestic and international.

Guanlan is part of the movement to recuperate elements of Shenzhen’s pre-reform history as a cultural resource. What’s interesting is that this recuperation is happening village by village. Consequently, what emerges is a loose network of sites, rather than an overall “history” of the city. In this case, Guanlan is the third Hakka site incorporated into the municipal cultural apparatus. The first was Dapeng Suocheng (大鹏所城), a military installation in the eastern part of the city. The second was Crane Lake Compound, which is now the Hakka Folk Custom Museum (深圳客家民俗博物馆鹤湖新居) in Luoruihe Village, Longgang (罗瑞合村).

Guanlan is an example of using pre-modern architecture to incorporate international art production into local identity. More specifically, the experience of architectural difference (such as living in a Hakka compound) bridges even as it creates cultural difference. Thus, the Base invites foreign and Chinese artists for residencies. These residencies allow foreign artists to “understand” China / Shenzhen and incorporate these new experiences into their art. At the same time, these exchanges also refigure a local art form (woodblock printmaking) as international cultural heritage. Importantly, this kind of “experience” of the local past as a cultural bridge seems a global trend. In Switzerland, we visited Romainmotier, which also offers artist residencies in a beautiful, restored, pre-modern setting.

This has me wondering about the ideological relationship between past and present urban settlements: Is “history” now the location of “culture”, while the “present” is all about one’s location on a scale of relative modernity? In other words, do Shenzhen and NYC participate in the same “culture”, their real differences explained away as “levels of modernity”? While their cultural “difference” must be found by excavating the past?