From December 2017 through February 2018, the P+V Gallery will be the site of the Longhua (Dalang) sub-venue of the 2017 Shenzhen-Hong Kong Bi-City Biennale of Urbanism\Architecture. The main venue will be at Nantou Ancient City. The theme of the sub-venue is: Migrations—Home and Elsewhere, Rediscovering Hakka History and Chinese-Western Cultural Exchange. The program is curated by Dr. Mary Ann O’Donnell in collaboration with Handshake 302 and the P+V Gallery History Association. The founding of the school and Hakka history are our point of departure for rethinking what it means to be an immigrant.

“Where’s your hometown” is a common conversation gambit in Shenzhen. Our answers map not only our past, but also complicated human emotions. Just ask the members of Handshake 302.

“In 2002, I traveled to Shangri-La. When the other tourists talked about where they were from, many said, ‘Shenzhen.’ Their Yunnan accented Mandarin was proud and hinted at something the rest of us didn’t understand.”—Zhang Kaiqin

“Even though I’ve lived in Shenzhen for over twenty years and married as so-called ‘Old Shenzhener,’ nevertheless nobody every considers me to be from Shenzhen.”—Mary Ann O’Donnell

“My hometown is where my parents are. As of today, that’s in Henan.”—Wu Dan

“When people in Shenzhen ask me where I’m from, I say Wuhan. Elsewhere, I tell them I’m from Shenzhen.”—Lei Sheng Shenzhen is a migrant city, its history of migrations even deeper than expected. Everyone has a reason for coming and reasons for staying. Home and elsewhere are the lodestars of every life, pulling us in multiple directions, enriching and muddling the waters of identity.

From the Song through the Qing Dynasties, Hakka people migrated from the central plains to southeastern China, each generation of migrants bringing their own customs, language, and etiquette. In the late 19th century, Western missionaries brought modern education to Longhua and other Hakka districts, catalyzing an exchange of Chinese and Western cultures. Since Reform and Opening began in 1980, tens of millions to migrants from the Chinese interior have come to Shenzhen, pursuing their dreams even as they build the city.

As people have spread across the world, we have lost homelands and remade them elsewhere, but they are not the same. We take root, we adapt, we create, and redefine “local” cultures. Exploring the meaning of “migration” at the Longheu P+V Gallery in Dalang gives us an opportunity to encounter the south again. What connects the migrations of Hakka peasants, Swiss missionaries, and recent migrants to Shenzhen? What irreducible differences define us? 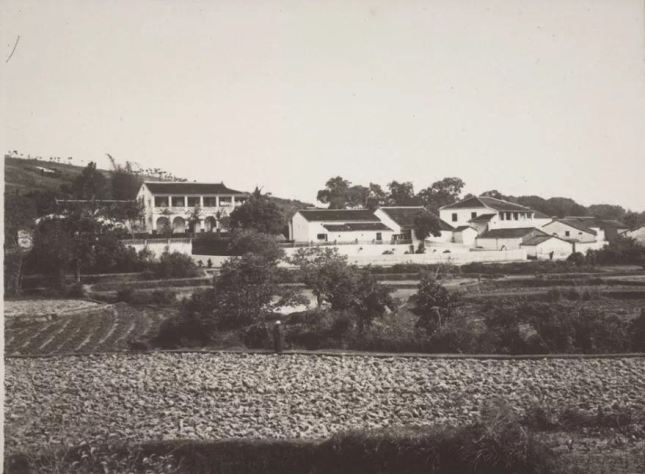 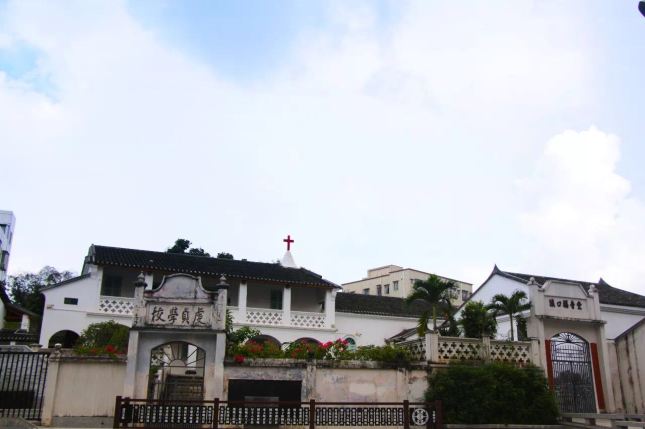 (1) The Home is Faraway Art Exhibition presents the public with five original artworks and performance at Langkou Village. The curatorial team has commissioned artists from public space of Langkou Village. The works of art are invited by local artists from Germany, Hong Kong and Shenzhen to develop the theme of “migrations.” Through these artworks, we activate corporeal and sense memories, exploring the presences and absences that define the migrant condition. Invited artists include: Katharina Sommer (Germany), Fang Hui, Liang Meiping (Hong Kong), YaYa Playback Theater, Cai Yinan, and Dong Jie.

(2) Mutual Gaze: The Longheu Artifacts International Exhibition explores the shifting meaning of home and homemaking from the perspective of the over 200 missionaries who came to Guangdong’s Hakka region from Basel, Switzerland. The Basel Mission established churches, schools, and hospitals, living in Hakka communities during the country’s most tumultuous century. Even after returning to Switzerland, their children not only fondly remembered Hakka culture, but also saved the domestic items that their parents had used in China—teapots, bookshelves, and paintings.

A witness to this history, the Longhua P+V Gallery has been entrusted with the task of exploring Chinese and Western relations in a new era, and the P+V Historical Association has met with with missionaries’ descendants in Switzerland and Germany to understand their lives while in China. They have authorized the P+V to display these private collections during the 2017 Biennale, giving us insight into how missionary and Hakka lives intersected and transformed each other.

(3) Public Programs will be offered every week of the exhibition. These programs include:

We will provide detailed introduction to these programs in future releases.

Remember, this is not a white box exhibition. Instead, it is a platform to further develop and exchange ideas with and about the community and its history. We understand the objects and programs to be catalysts for interpersonal communication. During the exhibition, visitors will have opportunities to grow their understanding of and connections to this specific place through conversation, art, and locally relevant research.

The inspiration for this exhibition is the same that has animated Handshake 302 projects. Lu Xun once said, “There is no road, the road is made by the people walking.” The important thing is to act and then all things become possible. 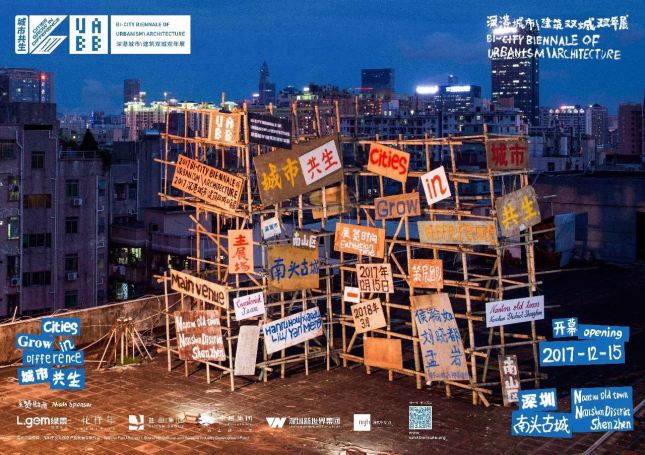 Initiated by Shenzhen in 2005 and joined by adjacent city Hong Kong in 2007, the Bi-City Biennale of Urbanism\Architecture (hereinafter referred to as UABB) has evolved into a unique breed among its kind that is held and interacted between twin cities: a Bi-city Biennale. UABB was originally conceived by the urban planning department of Shenzhen Municipal Government for the purpose of constructing a more influential, more professional and more interactive exhibition. Already held in Shenzhen and Hong Kong for six editions, UABB is the only international biennale that sets “urban & urbanization” as its permanent theme. With about 930 pieces of excellent exhibits and 520 activities, UABB has attracted over a million visitors worldwide. UABB takes full advantage of multi-media, such as design, image, installations, drama, public art, monographic study and discussion, and reveals different aspects of the progress of urbanization and human habitation of Shenzhen, Hong Kong, China and worldwide.

The theme for the 2017 UABB is Cities, Grow in Difference, which recognizes and includes of different origins, status and values at social, cultural and spatial levels. The curators are curator and critique Hou Hanru and Urbanus principals Liu Xiaodu and Mengyan. This edition of the biennale will be held in Nantou and the opening ceremony will be held on December 15, 2017. 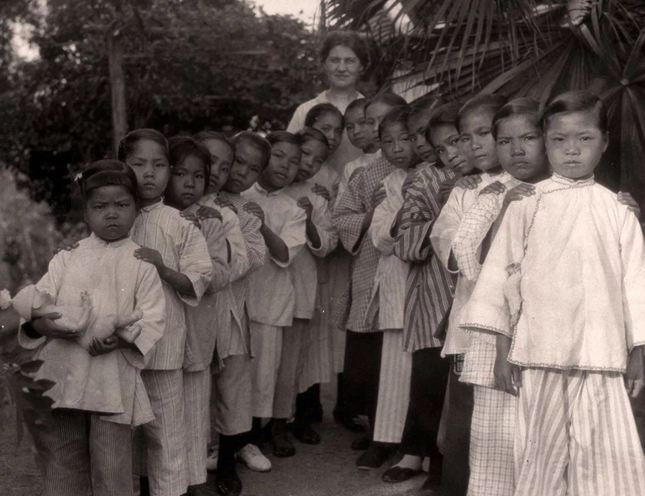 Located in Dalang Subdistrict, Longhua, the Longheu P+V Gallery is one of China’s heritage sites of women’s education. The P+V is the only surviving Christian heritage site in Shenzhen. It not only has value for historical research and cultural preservation, but is also an example of how to to activate and utilize historic buildings for community innovation. Langkou village was established in the early Qing dynasty by Hakka migrants, and there are still examples of traditional Hakka houses, western style houses that were built by overseas Chinese, towers, and the mission station. Missionaries first came to Hong Kong after 1850, establishing the mission station in 1891, when the Girls’ School moved from Xiyingpan, Hong Kong to Langkou. The school adopted a modern curriculum and the new science education along with traditional Chinese learning. At the same time, the innovative use of Hakka language teaching materials made the school animportant hub for Chinese-Western cultural exchange. Since its opening in 2016, the Longheu P+V Gallery has hosted many cultural and art activities, including the Hakka Culture Festival, special events of the ICIF, and the Art Sprouts program, a community arts education program. Today, the P+V is an important landmark in Longhua District.