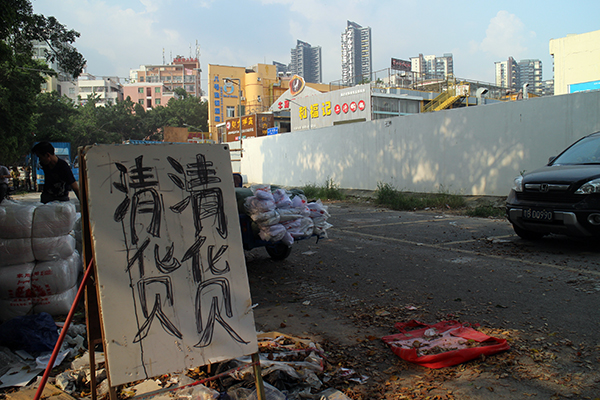 Yesterday, I heard this story: A 30-something farmer from Lanzhou came to Shenzhen in 2013 in order to make his fortune. He started out working for a relative in a Lanzhou Noodle Shop, and then after a few months decided to open his own noodle shop. After looking around for a suitable place, he decided to purchase the rental rights to a noodle shop in Baishizhou, on the western side of Shahe Road. The shop had been recently renovated and came with a hefty transfer fee—180,000 rmb with a high rent. But the man was enthusiastic. So he sold his homestead land (宅基地) as an initial investment and moved his family to Baishizhou, where they worked. Only his youngest son went to school, while his oldest didn’t go to high school so he could work in the shop. As the last of the buildings in the Shahe Industrial Park are being demolished, he is being forced out without any compensation and no way back home.

For its first 25 years or so, Shenzhen thrived on informality. Then as it opened the second line (and recognized) different kinds of migrants—come and you are a Shenzhener—it simultaneously began targeting the villages for “renovation”. In practical terms “renovation” has meant demolition, forced relocations, and redevelopment at a scale that prices most people living in Shenzhen out of the city’s center and into the outer districts. The decade of change covered by posts in Shenzhen Noted corresponds to this era of regularizing the city. Throughout this decade, most responses to urban redevelopment (on the part of renters) has been “we’ll move elsewhere.” Recently, intellectual opposition to the process has grown stronger, especially with respect to historic preservation. However, lately as I walk through Baishizhou and Dalang, I’ve been hearing a different kind of story, a story that suggests that the city’s success (and in its own terms, it is “success”) in demolishing and redeveloping urban villages has begun to change possibilities within the city. I now meet very few recent arrivals and instead find myself talking with relatively long-term residents who have been hurt by the city’s exorable shift from an open, informal frontier to a regularized city of law.

One of the more typical stories of the past decade has been the story of migrants who came to Shenzhen early, worked hard and then set up a small business in one of the Luohu or Futian Villages—Caiwuwei and Gangxia were the landmark villages. Then, when that village was demolished, they moved their business to a Nanshan Village, Dachong and Baishizhou were the two largest. This process of working informally allowed these migrants to accumulate enough money to build a small business and possibly build a house back home or in Shenzhen. Their children have been variously educated in Shenzhen and at home, but by and large have become middle class. Not widely prosperous, but secure enough to imagine managerial positions for their children; a step above the entrepreneurial hard work that allowed them to take root in Shenzhen’s informal economy.

Here’s the rub. With the demolition of the villages (twenty in the past five years according to a new report), there are no longer places for displaced, mom and pops to go. In order to bring their business elsewhere, they have to either buy into an established village or mall. These costs are well beyond what an ordinary migrant can afford because the closing of informal areas has raised the “transfer fee (转让费)” in urban villages, while the cost of buying into a mall is even higher. Transfer fees are central to the way the informal economy works. Landlords do not make improvements to property. Instead, renters make improvements, for example, putting in a kitchen and upgrading the basic environment. Transfer fees are paid by the next renter to the current renter, often to cover the costs of improvements as well as to make a small profit. In the past, the informal economy was expensive, but vibrant enough that most small shop owners could expect to recoup their investment (transfer fee), pay their rental, meet their daily expenses, and accumulate money to send back home.

The Lanzhou Noodle Shop owner’s story, for example, exemplifies both the current cost and risk of buying into the Shenzhen Dream. The current threshold for to set up an independent business (a start-up) leaves no room for failure. The business owner had to give up all of his assets—his land and future house, as well as his child’s education in order to pay the transfer fee and begin running his shop. Moreover, he could only afford to do so in an informal space that offered no legal protection for his investment. He was betting that he would have enough time to earn back and exceed his initial investment. The point, of course, is that he started in debt without a backup plan. Without success, he has ended up worse off than when he began, or as he said, “Today, my homestead land is worth 20 or 30,000 more than when I sold it.” So there’s the rub: in order to invest in the Shenzhen Dream, he had to give up his legally protected assets for the uncertainty (and implied wealth) of Shenzhen’s vibrant informal economy.

This is where I’m hearing changes to the story of buying into the Shenzhen Dream: in Baishizhou, transfer fees have not only been high and getting higher, depending on the location and extent of improvements to a rental space, but also requiring more of a risk on the part of the new arrival. Today, however, new arrivals don’t have the time to earn back their transfer fee, let alone accumulate capital for re-investment in their small business. Moreover, depending on how much of their lives—savings, home plot, and work of family members—that they have invested in starting up their business, the consequences of failure can be heart-wrenchingly tragic.

So what kind of a situation did the Lanzhou Noodle Shop business owner buy into in 2013? According to a neighbor businessman, the Shahe Corporation built these buildings in 1998. At the time, the first generation of investors paid 25,000 for the right to move into the buildings on completion. He understood that the corporation collected this money to pay for the construction of what were, even then, obviously temporary buildings; the building roofs, for example, are made of corrugated steel and have always leaked. They then paid rent to the Shahe Corporation. Over the next 15 years, building ownership changed and the business owners paid rent to different companies. However, apparently for the past 7 or 8 years, when discussion of redeveloping the area began, the building owners stopped signing formal contracts with business owners. Instead, managing the businesses became a month-to-month affair in anticipation of demolition and eviction. Consequently, for example, instead of fapiao (发票), business owners received shouju (收据). The difference between a fapiao and a shouju is legal status: fapiao show that you have paid taxes and therefore conducted a legal transaction. In contrast, shouju only show payment for the item, but not tax payment. In the face of demolition, only fapiao help a business owner negotiate for compensation; shouju do not. So here’s an interesting point: in fact, the lead up to the demolition and eviction has been a tenuous informality that may in the short-term benefit business owners, but in the long-term benefits building owners. Tellingly, these past six months (a little before and since the formal eviction of businesses in the industrial park in April), business owners have not paid rent at all.

All in all, 26 business owners have been displaced from this area. Unlike many of his 25 neighbors, however, the Lanzhou Noodle Shop business owner bought in too late to accumulate necessary capital to survive demolition and eviction. The other business owners came earlier and are older, and most will go into retirement; most aren’t willing to risk their accumulated wealth on buying into another business. In contrast, the Lanzhou Noodle Shop will have to go to work for someone else, and his son will also enter the labor force as an uneducated manual laborer.

This story has me thinking about the value of dreams in this kind of harsh environment. Only dreamers are willing to bet with their lives and risk everything. And for dreamers in rural China, they are not only betting their own lives, but also those of their family and descendants. The rational decision in this case is to be cautious, to horde, to take no risks until forced by circumstance. Voluntarily risking all in this kind of unprotected environment requires dreamers who are beautiful unafraid of failing. Indeed, during our talk, the Noodle Shop business owner admitted that he didn’t realize that development

Below, images of the extant demolition as of September 13, 2016, 9:30 a.m. The order of pictures is moving north from the beginning of the demolition area to its blocked of end. Indeed, blocking access to these shops marked the beginning of the end. There were two clashes over blocking off the street, but by this morning, September 14, 2016 the Lanzhou Noodle Shop owner was the only remaining resident. For images of the area immediately before the demolition read about mom and pop opportunities, as well as thoughts from a year ago about withering practices in and around Baishizhou.

4 thoughts on “baishizhou demolition: the rising cost of shenzhen dreaming”