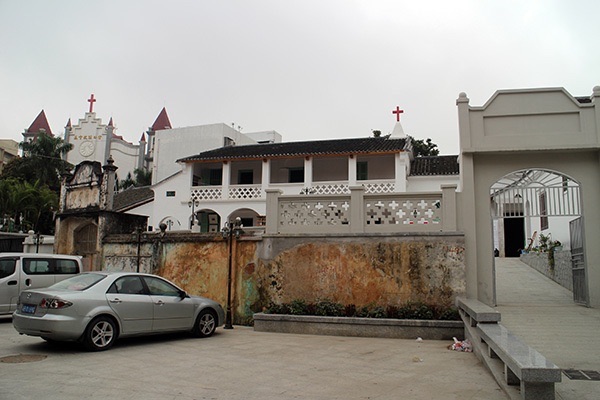 On Sunday, I became part of the scholarly committee (学术委员会) of the Devout and Chaste Girls’ School (虔贞女校)–a minjian organization. Other members in the group included architects, an archaeologist, an editor at a history journal of Bao’an District, an artist, and the Director of the Dalang Culture Office. The Dalang Vice Secretary of Culture also attended the meeting, but left early. In addition, clerical workers from the Department of Culture served tea and insured that the meeting ran smoothly. So what made us a minjian organization?

Bit of background: The Dalang government financed the restoration of the girls’ school after six years of lobbying by archaeologist Zhang Yibin and the Director of the Dalang Culture Office. Originally, they had hoped to restore the building and then entrust the local church (the Christin Church of Dalang) to run it. However, as with all issues of property rights in Shenzhen, rights to the building and land were fuzzy. The Basel Mission did build the girls’ school on land donated by Langkou Village in 1866. However, in the intervening years, the Chinese state expropriated the building and land and ran it as a school. In the Reform era, another church was built next door, also on village land. Neither the Church nor the villagers could reach an agreement on how to use the building once it had been restored and so the Culture Office suddenly found itself in possession of a restored girls’ school.

It may be useful to think of minjian as a resolution to social problems: In theory, the Culture Office could run the girls’ school as a museum or culture center. However, the Director believes that minjian can do a better job because the programs will (in theory) grow out of social concerns and actually affection for the building and what it represents. Thus, a first answer to the question, what is minjian is: minjian is comprised of concerned, non-official people who care about and organize around a particular issue.

Importantly, however, we can be entrusted with running the school/ museum/ culture center because we are being registered with the Dalang Department of Minjian organizations (民间部). As documented in other posts, Dalang has been actively registering and bringing in minjian groups to provide social services or gongyi (公益). has been Our actual scope of activities is to run exhibitions and events at the restored girls’ school on behalf of the government. In other words, Dalang is outsourcing this bit of cultural work, and the director and vice secretary of culture support this move. So a second, answer to their question, what is minjian is: minjian is a segment of Shenzhen society that is legally entrusted with tasks that previously would have fallen under governmental purview.

Thought to jour: Shenzhen’s active minjian derives its legitimacy not only from the state, but more importantly a broad consensus that “care” is one of the most important factors in society. The need for “care” is especially recognized at the lowest levels of government because in Shenzhen (as elsewhere), low ranking functionaries have to do much with few resources. Minjian allows the government to achieve goals at low cost. Minjian also allows pro-active citizens to create new forms of social agency and to receive state funding to pursue these goals. At the Devout and Chaste Girls’ School, minjian is concerned with carefully preserving and promoting local, situated history.

In December 2013, I participated in an exhibition about the girls’ school and its history. For more background information, visit my introduction to the Basel Mission in Langkou with photos of pre-restoration building. Below, images of the restored building and photos from the nearby along sheung subway station, just for a sence of the scale of Dalang. Indeed, with a population of 500,000, Dalang would be a city, rather than a precinct elsewhere in the world.

One thought on “minjian history”