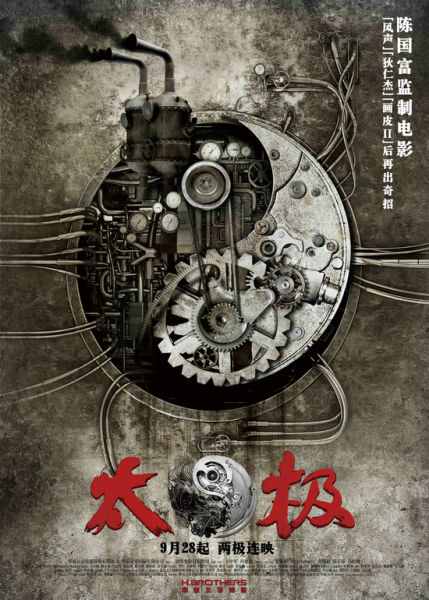 The plot is simple and the pace full-throttled. There is a village, where kung fu is treasured and passed down from generation to generation, but only to village members — no sharing traditional culture. There are masters who fly through the air and defeat mechanical trojan horses, which bring railway tracks and seductive foreign women. There is a phoney foreignor, who betrays his village and first love to redeem his personal honor. There is a latent hero, who learns kung fu despite the village’s prohibition against teaching outsiders, shuts down the trojan horse despite ignorance about things mechanical, and marries the village kung fu beauty despite being unconscious. All in 90 minutes of whirling feet and spinning hands, punctuated by moments of sudden stillness and insight into what happens to human hearts when forced into a corner. END_OF_DOCUMENT_TOKEN_TO_BE_REPLACED

I have been thinking about the purpose of human human adaptability. To what ends and how should we craft human lives? The context for my speculation has been the constant construction and reconstruction of Shenzhen, where I have watched the landscape constantly morph and mutate as if it were an organism with a life of its own and not a collaborative human project; all that is solid melts into air. Today, I am wondering: what kind of bodies are co-evolutionarily suited to this landscape?

Lately, in Shenzhen, human bodies, especially female bodies  have been changing even faster than the skyline. Discussions about women’s breasts reveal the range of  emotions and level of bodily change out there. Anxious discussions about milk powders and early sexual maturation (“precocious puberty”) frequently appear in newspapers. The most startling was the claim that milk powder caused 4-month baby girls to grow breasts, even as celebratory discussions of Gong Li’s voluptuous figure have been ongoing for years. In between these two extremes fall hospitals like Sunshine (阳光医院 in downtown Shenzhen) that specialize in cosmetic surgery to provide any woman with  the perfect 360 figure and debates about the perversions there of.

The diversity of these breasts have me wondering to what extent our ability to manipulate the world and our bodies has distracted us from the real work of figuring out who and where we are (pun truly unintended! I only caught on rereading post). If women only needed to interact with sexual partners and  hungry infants, I could understand how “water drop (水滴)” shaped breasts might enable us to become fully human. However, the crafting of an individual’s purpose occurs over an entire life through interactions with many different people. Thus, whatever the immediate benefits of cleavage (or six packs or firm buttocks…), it seems short-sighted and limited to confuse sporting / touching a set of 36 C breasts with human development.

The construction and reconstructions of Shenzhen suggest not only that human minds can imagine and build a world, but the forms themselves indicate how deeply we share a yearning for transcendence. Each building stretches deeper into the heavens, the roads connect more and more places, boundaries burst with new activities. Each human being is attempting to become more beautiful.

My musing about these new bodies the has been in terms of an ethical telos. Being human means that we are completed – perfected, if you will – through maturation toward a distinctly human purpose. This development constitutes human transcendence and must be embodied. Thus, I am not making an argument against the pleasures of the flesh, but seriously asking if we have confused what we can do with what we ought.