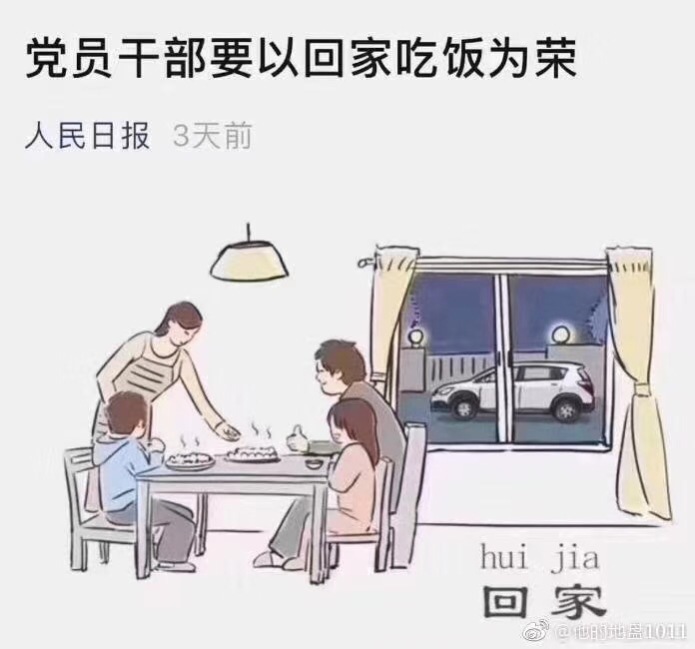 Neo-Confucianism continues to show up in unexpected places. Most recently, cadres are told that “going home for dinner is honorable.” Of note, with the window and the parked car outside the window, “home” suddenly seems uncannily US suburban. I know, inquiring minds continue to wonder: just how “American” is the Chinese Dream?

On November 4, 2012, the ruling Chinese Communist Party Central Committee bleeped that Bo Xilai would be tried in criminal court, neatly removing the last obstacle to the opening of the 18th National People’s Conference.

Bo Xilai’s dramatic fall began on February 6, 2012, when Chongqing’s “attack the black” hero, Vice Mayor Wang Lijun sought asylum in the US Consulate in Chengdu. At the time, it was thought that Bo Xilai might actually join China’s highest organ of power, becoming a Member of the Standing Committee of the Political Bureau, of the Chinese Communist Party Central Committee (政治局常委). On September 28, 2012, Bo Xilai lost his Party status. Indeed, the black box released an official missive, The Chinese Communist Party Central Committee Decides to Revoke Bo Xilai’s Party Status and Dismiss Him from Office  (中共中央决定给予薄熙来开除党籍、开除公职处分).

We now know about the murder of Neil Heywood, the trial and sentencing of Bo Xilai’s wife, Gu Kailai and the FBI’s help in repatriating his son, Bo Guagua. We have replayed the soap operatic laments of his first wife, Li Danyu and the Ivy league graduations and beef mogul career of their son, Li Wangzhi. Inquiring minds want to know: what else is there to learn from the Bo Xilai incident?

According to a post by Canadian Home (加拿大家园) Bo Xilai’s trial matters because it is not simply a corruption case, but also a political case. Moreover, the “Sing the Red, Attack the Black” campaign explicitly invoked the Cultural Revolution. Consequently, in preparation for Bo Xilai’s trial, Hu Jintao, Wen Jiabao, and Xi Jinping re-established the precedent of the Gang of Four trial. Thus, the Bo Xilai incident illuminates the contours of a neat (if unsuccessful) reversal of history. Deng Xiaoping came to power by sentencing Jiang Qing, Zhang Chunqiao, Yao Wenyuan, and Wang Hongwen. Likewise, Bo Xilai attempted to grab power from the reformers with a strong return to Maoism.

Yet another echo of the Cultural Revolution: In 1981, “the conscious of Chinese law”, Zhang Sizhi (张思之) represented the Deng’s political rivals, the demonized Gang of Four. Over the next decades, Zhang Sizhi has represented some of China’s most famous dissidents, including democracy activist Wei Jingsheng, sociologist Wang Juntao who advised students during the Tian’anmen Square incident, and Zhao Ziyang’s secretary, Bao Tong. Several days ago, Zhang Sizhi gave an interview, asserting Bo Xilai’s right to defend himself and to have an attorney. However, Zhang Sizhi also said that even with a proper defense, Bo Xilai would be convicted, the question of this “legal show” is simply: will Bo Xilai receive the death penalty?

All this anti-Cultural Revolution positioning reminds us of the extent to which the legitimacy of Reform and Opening has been based on the delegitimization of the Cultural Revolution, even as the heroic status of Deng Xiaoping was also very much based on his status as a PLA general. It also reminds us how seriously Standing Members take their absolute authority and why Bo Xilai did what he did in a gesture to join the black box club at China’s center. After all, the PRC is a mere 63 years old and thus for many Chinese the relevant and only political question remains: who is the true heir to Mao Zedong’s legacy?

The official death tole for the Beijing floods is 77 people. Weibo reports however, that in Fangshan District (房山区) alone over 800,000 people have been affected. In response, Mayor Guo Jinlong resigned yesterday, acknowledging his failure to be responsible for the people’s well-being. Today, Beijing Party Secretary Guo Jinlong went to Fangshan to show solidarity with those suffering. Yes, that is correct. In one of the more off the wall moments of Chinese politics, Guo Jinlong was both the Mayor and as of a month ago, also the Party Secretary of Beijing. Even in Chongqing, Bo Xilai was only able to act as Party Secretary, while the Mayorship was held by Huang Qifan.

Here’s the beauty of Guo Jinlong’s gesture. As a government functionary, Guo Jinlong could legally resign. However, as the holder of a Party appointment, Guo Jinlong can only loose his position as Party Secretary if the Party leadership decides to remove him from office — hee!

Now, Guo Jinlong is of interest to those of us in Guangdong who are following Guangdong Party Secretary Wang Yang’s career because like Bo Xilai, Guo was one of Wang Yang’s key rivals to become either Secretary General of the Chinese Communist Party or President of the Country. To be appointed to one of the top two positions in China, Wang Yang must first be appointed to the Standing Committee of the Political Bureau, CPC Central Committee during the 18th NPC. These nine hopefuls will be chosen from provincial level appointees, which includes the Secretary Generals and Mayors of the four independent cities (Beijing, Shanghai, Tianjin, and Chongqing) as well as provincial secretary generals and governors.

In January this year, Wang Yang’s top rivals for one of the nine positions in the Standing Committee were Chongqing Party Secretary Bo Xilai and Beijing Mayor Guo Jinlong. Whatever one thinks of Wang Yang’s “three attacks and two establishes” campaign, notwithstanding, as a recent text message reveals, the Beijing floods may have given Wang Yang the push he needs to get one step closer the highest positions in Chinese politics. So the country may flip neo-liberal even faster than expected, not because privatization works, but simply because recently several political high-fliers are crashing and with them, alternative models of development.

Insights from the Beijing Floods (北京水灾几点启示)：

1。The water in Beijing is deep；2。In Beijing, having a house and car is nothing, you also need to have a boat；3。All Beijing subway stations have the same name — Drainage Pool (a pun on the actual station 积水潭)；4。Car owners finally understands the government’s great efforts to collect “car and boat taxes” from private citizens；5。The South to North Water Diversion Project (南水北调工程) is finally seeing results (this massive engineering project will be completed in 2013, connecting northern provinces to the Yangtze River)；6。The Northern Drifters finally have a correct footnote (artists who go to Beijing to make a career are known as “northern drifters (北漂)”；7。As soon as Wang Yang enters the capitol he will have a job (because both characters in Wang Yang’s name have the water radical: Wang (汪) is a surname that means an expanse of water and Yang (洋), his given name, means ocean).