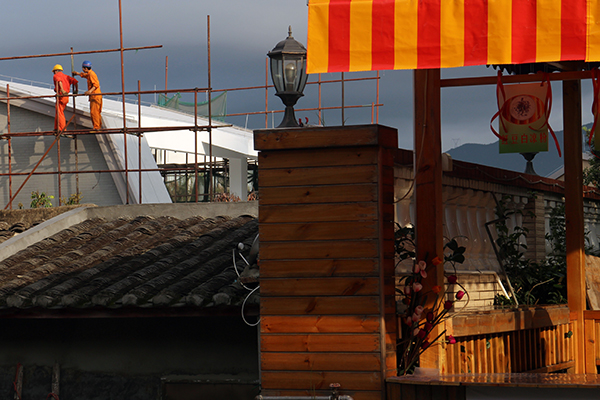 Almost one year ago, I posted on the development of Jiaochangwei, which is probably best understood as Atlantic City or Coney Island on speed, Shenzhen speed.

The story I gleaned this past weekend is as follows: Jiaochangwei (较场尾, literally “tail of the training ground”) was an afterthought village located just beyond the moat for the Dapeng Garrison. In the early 80s, villagers began building family homes along the beach. In 1997, Some folks in Shenzhen “discovered” Jiaochangwei and purchased houses and homestead plots from Jiaochangwei villagers, redeveloping them for private use. For the next 15 years, they used these homes as beach houses–second family homes where they entertained guests.

In 2011, Shenzhen began developing its coastal tourist economy in Dapeng. In 2012, several young people rented Jiaochangwei farmer homes and converted them to hostels. In 2013, several more joined them. By 2014 there were over 100 hostels, and guestimates put the current number of hostels over 200. That same year, the Street Office invested 400 million rmb in upgrades to the area, which is now known as “Jiaochangwei Homestay Town”. 70% of the upgrades were spent on putting in basic infrastructure and 30% were spend on landscape design and public space. Today, about half the available housing stock has been converted to a hostel. Apparently all of the hostels are now on the sanitation grid, although it is unclear if private homes have been connected.  spaces are being developed as bars and coffee shops.

Like Dafen Village, Homestay Town began as an unregulated, low-capital venture of locals and renters. As in Dafen, once the commercial value of the local economy had been developed to a certain level, the government stepped in to regulate extant business and begin planning the direction of future development. And like the grey economies of urban villages throughout Shenzhen, the only recognized stakeholders in Jiaochangwei are the local villagers/ homeowners, the government, and a potential developer. The renters and their improvements hover in an uncertain legal space, and they are therefore determined to recoup their investments as quickly as possible, so that if and when the government decides to renovate Jiaochangwei, they will be able to walk away with something more than debt.

One of the interesting twists on the Jiaochangwei story is that (for the moment) the small hostels withstood an attempt to bring in big investors and transform Jiaochangwei into a resort area like Dameisha and Xiaomeisha, which were developed by government appointed agents. The reasons given for the current stand-off are (1) Shenzhen people like hostels; (2) Jiaochangwei has a local personality (a loose translation of the expression 接地气), and: (3) the government has already spent more than 250 million on infrastructure and aren’t yet ready to make the investment necessary for a larger, more upscale resort area. That said, however, we’re only four years into a more determined effort to stimulate the Dapeng economy through local tourism and who knows what 2016 will bring.

As we enjoyed the view from his balcony overlooking the bay, one of the original 1997 homeowners opined that if Jiaochangwei continues to grow at this pace, the government will need to step in and sell tickets for the beach. Otherwise the costs of keeping the beach clean will become too expensive for the hoteliers, who aren’t responsible for all the garbage.

The images below give a sense of boardwalk Shenzhen–vernacular architecture and landscaping, technicolor sunlight, and construction that already stretches into Dapeng Garrison.