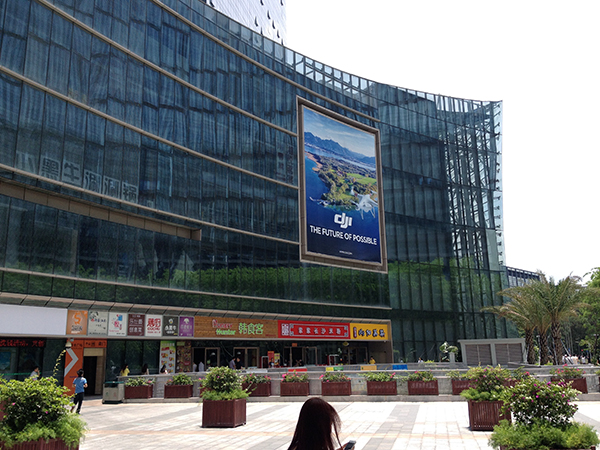 When I first saw the above advertisement for DJI, one of the world’s leading producers of drones, I balked. It seemed to me to be a picture that celebrated spying on the private and unaccessible mansions of the all-too-rich. So, given the unreliability of my American gut reactions in China, I asked the young women standing next to me, “What do you see in that advertisement?” She responded, “a pretty landscape.” I was like, “What about the dock? The big mansion? The coastline that resembles Newport’s?” She looked at the advert again, nodded, and then tentatively added, “We see things differently because of cultural difference.”

I asked another friend about what he saw. He responded that all drone technology is about what could not otherwise be seen. He went on to explain that drone technology creates perspectives that do not exist except through these technological interventions. “So, it’s not about spying?” I pressed. “Nope.” Hmmm. Seems like the pleasures of spying to moi.

Or rather, seems like an attempt to sell spyware as if it were a toy or an artistic medium. After all, drone technology began and continues to be primarily used by the military. Indeed, even high-end DJI drones sell at the low, throwaway end–say $US 500–of an industry where the flyaway cost of an MQ-9 Reaper was $US 16.9 million. Indeed, two of my favorite deployments of democratic drone-fare are the crowd sourced science of the Fukushima map project and views of the umbrella revolution (below).

That said, the pleasures of seeing what might otherwise might not be seen muddles the issues of drone-fare and counter-insurgency. The spying, the glimpses, the viewing–these pleasures are the ideological form that makes it “okay” to play with weapons. And when I get here, again, I balk. I hear Plato calling to kick the poets out of his Republic, and I get it. The poets make us fall in love with war and its heroes. And yet. Who’d really want to live in a world without Euripides?

Knowledge is not wisdom.