For a brief moment, the following bit of satire circulated on the Chinese web:

Rumor has it that after Hotpot was swept away by the Direct Line to Heaven, Noodle Master Kang of the Mother Company was openly fighting with Tire and Heaven Direct. The morning fireworks on the 20th were also part of this fight, with the result that the Noodle Master Kang took a serious hit. Even though these past nine years Heaven Direct has charged his way into the silver screen, nevertheless he’s well intentioned. After all, twenty years ago just outside the preserved ham shop, he was the man who stood behind Yangzhou Fried Rice. If y’all sing and eat hotpot again, his nine years of blood and sweat will be as nothing. Thus, it’s a good thing that Tire has the camouflage firmly in hand and soundly thrashed those instant noodles. [original: 听说火锅被天线端掉之后,母公司康师傅正面死掐轮胎和天线，20日凌晨炮竹声也是此事，结果是康师傅惨败。天线这九年虽进军影视，但人心向善，毕竟20年前腊肉馆外他是站在扬州炒饭背后的男人，你们再唱歌吃火锅，人家九年心血全没了，所以幸亏轮胎紧握迷彩涂装不放，才狠摔方便面。]

Traces of the passage remain in google cache but can no longer be accessed on Baidu (image below). 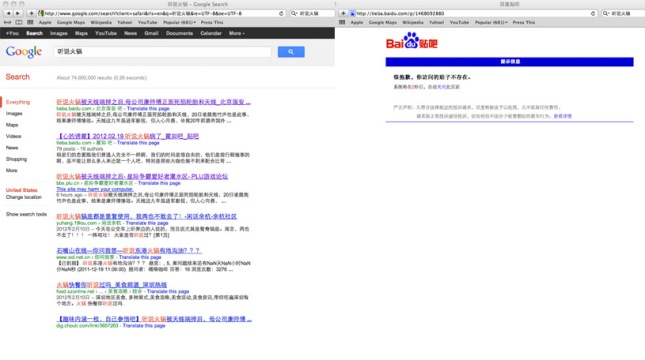 Why was the spoof so quickly removed from Baidu?

Xin Su provides a telling gloss of the passage:

Heaven Direct — Wen Jiabao, from the Chinese translation of Teletubbies (天线宝宝). 天线 is literally “Line to Heaven” but means aerial or antennae, a reference to the Teletubbies strange headgear. 宝宝 means “treasure treasure” a term of endearment for small children. 宝 is also of course the second character in Wen Jiabao’s given name.

Mother Company — powers behind the stage.

Tire — Hu Jintao, from the Korean Kumho brand of automobile tires, the Chinese characters for Kumho are “锦湖”, which obviously puns Ju Jintao

Fireworks on the 20th — rumors that someone had heard gunshots in Beijing.

“Charging the silver screen” — a reference to the fact that Wen Jiabao loves to cry in his public appearances, earning him the accolade of China’s best actor.

So, a direct translation of the passage would read: After Wen Jiabao had cleaned up Bo Xilai, Bo’s key supporter Zhou Yongkang was soundly defeated by Hu Jintao and Wen Jiabao. The gunshots heard on the morning of March 20 were part of this affair. Wen Jiabao has been performing for nine years now, but he has a good heart. After all, twenty years ago during the Tian’anmen Crackdown, he stood behind Zhao Ziyang when Zhao went to speak with the students. If the “Sing Red, Attack the Black” had continued, then Wen’s nine years of hard work would have been for nothing. Fortunately for him, however, Hu Jintao still controls the military and was thus able to defeat Zhou Yongkang.

Ironically, I found the passage and its interpretation on the Chinese version of the Epoch Times (大纪元大陆新闻), which is now unblocked in the Mainland. Consequently, this mocking passage is-is not in the Mainland public sphere, a pretty accurate reflection of how information ebbs and flows behind the great firewall. More to the point, the Baidu fate of  Hotpot Waters shows us that in the Mainland we can now speak of Jiang Zemin’s role in the persecution of Falungong practitioners, but not how he came to power as a result of his role in the Tian’anmen crackdown.

Meanwhile, the center has abruptly announced that next week over 3,300 county, city and provincial – level police commissars (政法委书记) have been called to Beijing for “assembled training (集训)”. The lesson to be taught? “干什么、怎么干” or “What to do and how to do it.” Of course, my inner satirist can’t resist mentioning that more colloquially this could be interpreted to mean (as does the English, for that matter) that the Country’s top ranking military commissars are assembling in Beijing to resolve the question of knowing “what to fuck and how to fuck it”.

2 thoughts on “the tale of hotpot waters…”