One of the major complaints that I am hearing in Shenzhen is the lack of transparency about information about the new coronavirus; most of the information we are hearing isn’t coming from official sources. Indeed, the first announcement of the Wuhan coronavirus came from eight unnamed, unofficial sources, which announced that a new virus had been discovered. The Wuhan police “handled them according to law” for spreading rumors and reminded the public that “the net isn’t outside the law.” 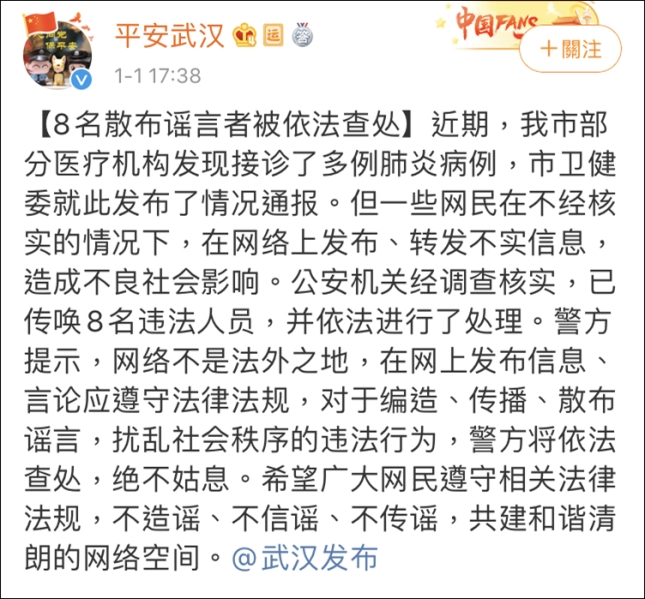 However, in retrospect, it seems the so-called rumor mongers weren’t completely wrong, making them seem more like whistle blowers. Once official channels confirmed what the eight had said, there were questions about what had happened to the eight. If they had been arrested (被抓了) were they being held? Subsequently, China’s highest court stated that “even if the new coronavirus wasn’t SARS, the information in the posts wasn’t completely made up.”

What can we infer from these posts? There were 8 whistle blowers. They probably said something like SARS might be back and probably encouraged people to take relevant precautions–use breathing masks, disinfect, and avoid wet markets where wild animals are sold. The court believes that eight didn’t make the situation worse and may have helped in the current battle against the coronavirus. What’s more, the court cautions that going after every non-factual statement online may give rumors unnecessary legitimacy.

What we still don’t know: what actually happened to the eight whistle blowers. How were they “handled”? And because the original posts have been deleted, we also don’t know just how factual they were.

Not surprisingly, media events like this make it difficult for ordinary people to trust official media. After all, the question lingers: if whistle blowers hadn’t forced the hand of the Wuhan government, would they have released any news about the new coronavirus?

The desire to prevent people from panicking is the most common explanation for not reporting events like the possible appearance of a new coronavirus. There is also a turn to scientific method; only what can be confirmed is made public. However, it is also the case that CPC news organs only “report good news and not bad (报喜不报忧).”

In practice, the “report good news and not the bad” has an upside and a down. The upside is to keep people from worrying unnecessarily. The downside is that the format requires a heroic conclusion to events in order for them to be reported. This means that we are never completely sure that we know what’s going on, which in turn, promotes generalized distrust of official reports because (1) we don’t know what isn’t being said and (2) once a story is released, it forces one to reevaluate history.

Consider, for example, the story of malaria in Shenzhen. Although the rate of malarial infection had begun to go down in 1994, reaching national standards of infection rates of 1 in 10,000 in 1997, nevertheless Shenzhen only officially announced that malaria had been eradicated from the city in 2018. When I came to Shenzhen in 1995, friends and interlocutors frequently mentioned mosquitos as one of the city’s problems, but didn’t mention it was just overcoming endemic malaria. What’s more, its possible that unless they were assigned to the city’s nascent CDC they didn’t know how prevalent malaria was (Mason 2016).* In contrast, after 2018, overcoming malaria has been represented not only as an example of how the first generation of migrants–especially scientific professionals–contributed to the city’s construction and well-being, but also as an example of how collective values continue to shape the city.

Here’s the rub: most of my friends and I came to Shenzhen when malaria was endemic to the city. When I started preparing to come to Shenzhen in 1994, the Chinese government required that I take an AIDS test in order to secure a visa. However, I wasn’t advised to get a malaria vaccination. What’s more, when I arrived, no one told me that I should consider getting a vaccination, unless, of course, I was planning on going to Southeast Asia on vacation. So yes, something of a WTF?! moment when I learned about the history of malaria in the city.

That said, there is also something of a consensus that Shenzhen is releasing the most reliable reports on the city’s status. This is attributed to both the city’s level of professionalization as well as its SARS experience. Shenzhen, I am assured, knows what it’s up against, is able to handle it, and understands the importance of timely and reliable reports.

* One of the contributors to Learning from Shenzhen, Kate Mason wrote, Infectious Change: Reinventing Chinese Public Health after an Epidemic (2016, Stanford University Press) based on fieldwork she conducted in southeastern China. Chapter one introduces how malaria was overcome. The book was published by Stanford University Press in 2016 before the war against malaria was won and victory announced.