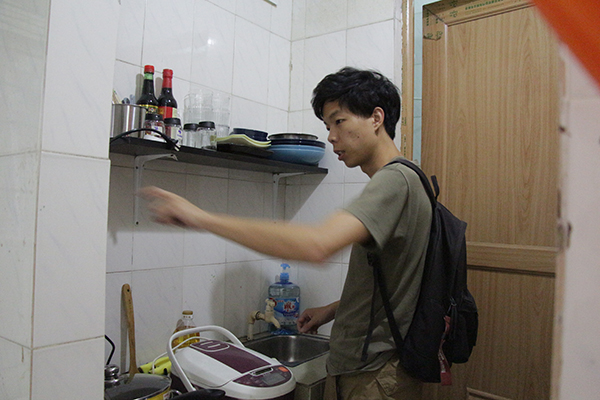 “Singleton Lunch” is a thought experiment with food. Handshake 302 invites participants to prepare a meal for 4 to 6 people (the average size of a household). We provide rice, oil, seasoning, bowls, water and electricity. We give the chef five yuan per person to purchase ingredients anywhere in Baishizhou. The chef uses these ingredients to prepare a meal. During the meal, the chef leads a discussion about the challenges of making a home in Shenzhen. In other words, “Singleton Lunch” asks people to share their stories about settling down in a city, which is famous as a destination for unmarried migrants.

You may be wondering: why only five yuan per person?

Handshake 302 has used some simple statistics as as a point of departure for imagining the difficulty of getting married and raising children in Shenzhen. Based on a 25,000 sample, for example, the average salary in Shenzhen is 5,199 yuan per month. However, when we place that figure in context, we realize that 62.5% of the sample made 6,000 or less per month, while another 15% made between 6,000 to 8,000 per month. In other words, a significant majority of Shenzhen people are earning 8,000 or less per month.

What’s the problem? Housing costs are rising faster than salaries.

This means that most Shenzhen migrants end up renting. According to statistics that were released in September 2017, the average rental for a an apartment was 7,000 yuan per month. In other words, most people in Shenzhen earn less per month than the average cost to rent an apartment. In turn, this means that most people live in urban villages where housing rentals are significantly lower or find roommates to share housing costs. Even so, that same report claimed that on average young Shenzheners hand over 60% of their salary to their landlord every month.

Of course, British Prime Minister Benjamin Disraeli once said, “There are three kinds of lies: lies, damned lies, and statistics,” meaning that people frequently use statistics to bolster weak arguments and sometimes they use statistics to lie. However, Handshake 302 is not using these statistics to make wild claims about the impossibility of raising a family in Shenzhen. Instead, we are using these statistics as a question: how, we wonder, are young people thinking about marriage and family life when housing seems unaffordable? Except for the lucky few are “naked marriages” the new normal?