In a series of responses to E.J. Eitel’s Europe in China: The History of Hongkong from the Beginning to the Year 1882, I read within and against the emergence of the Shenzhen Special Economic Zone. I am not so much interested in providing a comprehensive history of the SEZ  as I am in tracking Shen Kong, a form post-Mao post-coloniality that is one of the roots of the Belt and Road initiative. As I read, I note associations that link contemporary Shenzhen and colonial Hong Kong. In those flashes of awareness, the norms and forms of contemporary global restructuring make uncanny and distressing sense. Page citations are noted in parentheses and refer to the 1895 edition of Europe in China.

Sex in the Chasm

Early British rendering of the border. Note that the British claimed up to the high tide mark on the coasts of Deep and Mirs Bays. At the time the map was drawn, there were at least two languages–Weitou and Hakka–spoken in and around Shenzhen Market. Consequently, the romanization for the characters 深圳 has been a bit of a mish-mash, inconsistent even in official documents and sinage.

What to make of E. J. Eitel’s famously infamous introduction to his history of Europe in China: From the Beginning to 1882?

“At first sight, indeed, the Colony of Hongkong [sic] appears like an odd conglomeration of fluctuating molecules of nationalities, whose successive Governors seem to be but extraneous factors adventitiously regulating or disturbing the heavings of this incongruous mass. But in reality the Hongkong community is solidarily one. Though an unbridged chasm does yawn in its midst, waiting for a Marcus Curtius to close it and meanwhile separating the outward social life of Europeans and Chinese, the people of Hongkong are inwardly bound together by a steadily developing communion of interests and responsibilities: the destiny of the one race is to rule and the fate of the other to be ruled (i).”

Unlike Eitel, I didn’t receive a classical education and had to google “Marcus Curtius” to understand the opening paragraph, finding this passage:

“After an earthquake in 362 BC, a huge deep pit suddenly opened in the Roman Forum, which the Romans attempted to fill in vain. Despairing, they consulted an oracle who responded that the gods demanded the most precious possession of the country. The Romans doubted the warning, and struggled to think of what that was. However, a young soldier named Marcus Curtius castigated them and responded that arms and the courage of Romans were the nation’s most precious possessions. Astride his horse, fully and meticulously armed and decorated, Marcus rode and leapt into the chasm. Immediately, the deep pit closed over him, saving Rome.”

Most images of Marcus Curtius’s leap into the chasm equate the breach with the mouth of hell. There are, of course, differences among representations of the young soldier’s self-sacrifice. In a version by Lambert van Noort (c. 1520-1570/1), for example, although the figure of Marcus Curius dominates the canvass, he is nevertheless shown in relationship with a town of soldiers, madonnas, and minstrels. Indeed, the gathering is almost cheerful and the chasm not so large—in fact, the hole seems just the right size for horse and rider. In contrast, in a version by one of Rome’s most popular apologists, Giovanni Paolo Panini (1692-1765), the flames from the chasm illuminate the Forum, which threaten to engulf the otherwise cool and rational space. But even so, none of these chasms are as broad and deep as the Shenzhen–literally “Deep Furrow”–River, which in 1898 became the border between the Qing and British Empires.

A bit more rummaging about the google hole reveals that the story of Marcus Curtius is one that survives to explain how the Lacus Curtius, an important landmark in the Roman Forum came to be named. The stories are messy with unfulfilled promises, desire, and the honor proper to men and women. Speaking as the Hong Kong Inspector of Schools, Eitel cited the version in which a young Sabine warrior united society through a self-sacrifice that embodied Rome’s highest values. In this case, it would seem his call for a “Marcus Curtius” was a call for a Chinese man—and yes the Chinese translation of “马库斯” is one felicitous syllable away from Marx, 马克思—to take up the British cause. In a first approximation of what the book is about, it seems Eitel hoped to achieve a society based on the honor proper to colonized men and women, which in turn would explain or be explained by his duel role as educator and missionary.

We know that the abduction and forced marriages of the Sabine women to Roman soldiers was a metaphor for the foundation of a new civitas. When Rome was founded in 750 B.C.E., the Romans negotiated unsuccessfully with Sabine men for brides. The Sabines refused, but the Romans wooed the women with a festival and apparently promises of property rights and political stature for wives and mothers. Elizabeth Vandiver, for example, suggests that “Roman society recognized that women, no less than men, must make moral decisions about public as well as private matters, and that society will benefit from women whose moral character is strong enough to make appropriate choices.” Meanwhile, the Sabine men declared war on Rome and followed their king, Titus Tatius into battle. Tareia, daughter of a Roman governor let the Sabine soldiers into the city gates, thinking that the Sabines would give her gold. Instead, the soldiers crushed her to death and through her body from a cliff, which is today called the called “the Tarpeian Rock.” Once inside the gates, the Sabine and Roman men engaged in a back and forth battle until the Sabine women intervened (see Livy, History of Rome) for complete text:

[They], from the outrage on whom the war originated, with hair disheveled and garments rent, the timidity of their sex being overcome by such dreadful scenes, had the courage to throw themselves amid the flying weapons, and making a rush across, to part the incensed armies, and assuage their fury; imploring their fathers on the one side, their husbands on the other, ‘that as fathers-in-law and sons-in-law they would not contaminate each other with impious blood, nor stain their offspring with parricide, the one their grandchildren, the other their children. If you are dissatisfied with the affinity between you, if with our marriages, turn your resentment against us; we are the cause of war, we of wounds and of bloodshed to our husbands and parents. It were better that we perish than live widowed or fatherless without one or other of you.’

The Intervention of the Sabine Women by Jacques-Louis David (1799)

Here’s the rub: Just as Eitel’s understanding of “colonial honor” came from the celebration of imperial Rome, his understanding of “the Chinese” was based  on experiences in Xin’an County, the territorial predecessor of both Shenzhen and Hong Kong. A graduate of the Schönthal Theological Seminary in Germany and a member of the Basel Mission to China, Eitel was first based in Lilang (today part of Buji Street Office) from 1862 through 1865. Lilang itself was the principal educational center for Basel Mission until it moved to the Wuhua area in Meizhou. At the time of Eitel’s sojourn in Lilang, the New Territories were still part of Mainland China. Indeed, the selection of Lilang placed the Basel Mission at the border between local and Hakka settlements, just beyond the Weitou settlements around Deep Bay. Although the Basel Mission continued to have a presence in the Hakka “lowlands,” their decision to move northeast and set up a “highlands” base in Wuhua was also a decision to move to a less contested region.

Eitel left the mission to the Hakka, when he was denied to marry an ex-Catholic. Consequently, Eitel and his finance Mary Anne Winifred Eaton transferred to the London Missionary Society at Canton, where they married only moving to Hong Kong in 1870. This transfer allowed Eitel to work on his Cantonese and seven years after moving to Hong Kong, Eitel published a Cantonese-English Dictionary. In 1879, he resigned from the London Society in order to make his career as the Hong Kong Government Inspector of Schools (1879 to 1896). 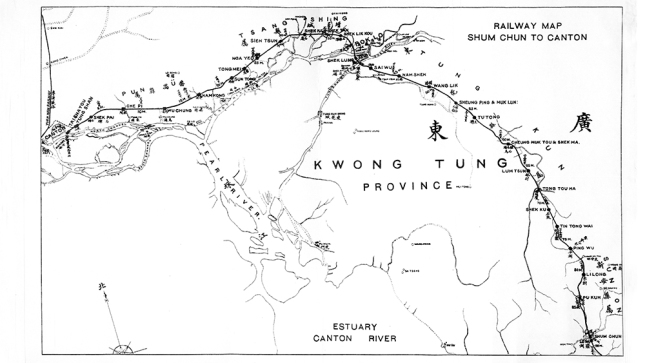 Map of the Shenzhen to Guangzhou section of the Kowloon-Canton Railway, circa 1925 shows that Li Long (Lilang) is located directly north of Shenzhen Market. It was the third station on the original train line. Map by Peter A. Crush.

At the end of the nineteenth century, Hong Kong was one of the Royal Navy’s great bases, with fortresses to defend the eastern and western entrances to Victoria Harbor. Two infantry regiments, one Indian and one British as well as the Royal Artillery manned these fortresses. The colony’s European population primarily comprised single men who had come to Hong Kong to make their fortunes, either postponing marriage, or else leaving their families behind them in their home countries. These men visited prostitutes and set up informal households  with Chinese women—“the secret inchoative union of Europe and Asia.” Indeed, Eitel does not mention, but could not have been unaware that “the dreadful complaint” was rampant among garrison cadets. In fact, in 1897 (two years after Europe was published) 499 out of 1,000 men in the Hong Kong garrison admitted to being treated for venereal disease. We don’t know how many Chinese women suffered from genital itching and burning, or if infection made sexual congress painful.

Perhaps for Eitel it went without saying that domesticated sex between British men and Chinese women would transform “an odd conglomeration of fluctuating molecules” and “an incongruous mass” into an intelligible social order of European rulers and ruled Chinese. We do know that Eitel did not approve for Anglo-Chinese households, but he did advocate girls’ education. In Shenzhen, the Basel Mission opened the Longheu Girls’ School in 1891 and photographs of teachers and students show the making of proper women. Indeed, girls’ education was central to Eitel’s work both at the Basel Mission and as Inspector of Schools, suggesting the extent to which proper forms of femininity—especially Chinese femininity—came to define the chasm that separated  men from the boys, Victorians from the Mandarians, and ultimately, Hong Kong from the Mainland. 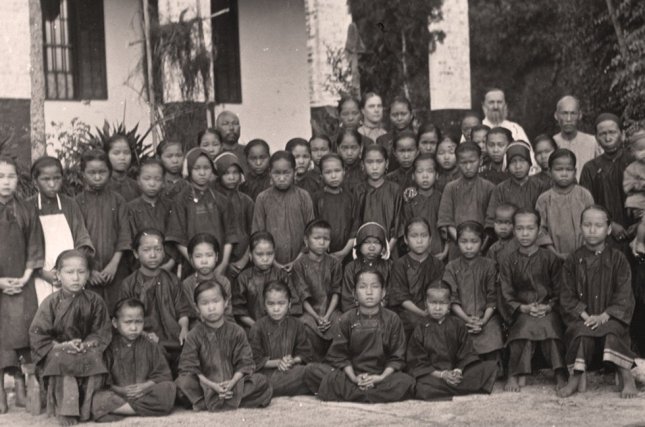 Photograph of the Basel Mission Longheu Girls’ School, circa 1898. Missionaries came to ‘Hakkaland’ via Hong Kong and then were stationed throughout Xin’an, Huizhou and Meizhou.

When Eitel’s Europe was published in 1895, Great Britain’s colonial expansion was celebrated not only as good for the Brits, but also great for humanity. Huzzah, cadets! The Victorians not only admired Italian Renaissance representations of Marcus Curius’s self-sacrifice, but also repeatedly copied it for both aesthetic and pedagogical reasons, as did other European and North American painters of the late 19th century. Thus, when Eitel cited this story, he referred to a popular account of imperial origins that his intended readers would have recognized as noble and good. Today, however, its difficult to read this passage and not “grab back;” find yourself another groove to work, soldier boy. Eitel’s emphasis on unions and heavings reminds us that colonialism was something carnal and messy–potentially enceinte, a French loanword that in English refers both to fortified, enclosed spaces and to pregnancy. Moreover, it leaked across borders and into everyday awareness. With a story that simultaneously glorified and disavowed that the violently gendered origins of colonial societies, Eitel reminded imperial cadets (and their families) that holding the Empire, circa 1895 required clear distinctions between who fucked, who was fucked, and who should stop fucking around.