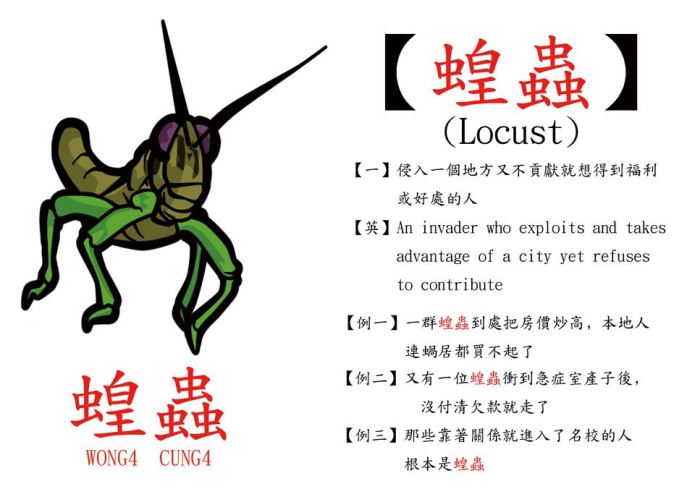 In January 2014, anti-Mainland sentiment in Hong Kong resulted in protests calling for the “locusts” of Mainland smugglers to leave the territory and for border controls to be tightened against them. The expression “locusts” appeared again in a 2015 description of Mainland students studying at Hong Kong universities and “stealing jobs” from locals. A week ago, there was another burst of anger against “locusts”, this time against the small time parallel traders (“water guests or 水客“) who purchase goods in Hong Kong for resale in Shenzhen and other Mainland areas. In turn, pro-Mainland blogs have argued that “local termites harm Hong Kong more than locusts do (本土白蚁比蝗虫更损香港)”.

The idea of Mainlanders as locusts was first given form in the “Locust World (蝗虫天下)”, which was uploaded to youtube on Feb 27, 2011:

This was followed by “Hong Kong Dogs Send Off the Locusts (香港狗送蝗虫)”.

I’m not sure how accurately the videos represent the anger and resentment that some Hong Kong people — usually young, often members of the same demographic of many umbrella movement protestors — hold toward Mainlanders. I do know that whenever I go to Hong Kong I am confronted by this antagonism in subtle and not-so subtle ways which range from a generalized fear that Shenzhen is not safe to harassment of pregnant Mainland women when they cross the border.

Today, I am thinking about insects as symbols of the cross-border dangers. Indeed this is not the first time that insects have been deployed to figure relations between Shenzhen and Hong Kong. Over thirty years ago, Deng Xiaoping cautioned that opening a “window” of reform in Shenzhen would not only let in fresh air, but also a few “flies”, presumably including exploitation, shady business practices and prostitution. Several years later, Shenzhen Mayor Liang Xiang promoted “ant theory”, arguing that once a few Hong Kong investors had tasted the “sugar” of reform, more and more would come to the SEZ and invest. Sugar, of course, referred to preferential and exceptional policies.