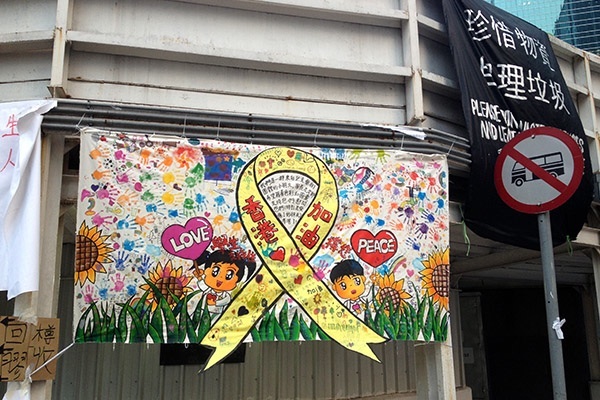 This year marks the 25th anniversary of the Tiananmen Democracy movement and fateful crackdown on June 4, 1989. Annual commemoration protests have continued in Hong Kong since then. Perhaps 25 years of organized resistance to the violence of the Chinese State against unarmed protestors and commemorating student courage nurtured the soil for Occupy Central, nevertheless this year young Hong Kong people found voice and civil form for their own cause–truly democratic elections and autonomy in education, the media, and social organization. Indeed, if this level of civil disobedience is the result, all our children should grow up with the fine example of commemoration protests. And patience for our just seeds to bear fruit.

Beijing has already confirmed its support of Leung Chun Ying, the SAR’s unpopular Chief Executive, and crony of folks in Beijing. Unfortunately, the more cynical of us on this side of the border may be correct in supposing that as far as Beijing leaders are concerned what matters about the protest how it impacts Beijing.

Anyway, yesterday my husband and I crossed at Shenzhen Bay to Hong Kong, taking a bus directly to Sheung Wan. We arrived around 3 pm. The streets near the Macau Ferry Terminal drop-off point were quiet. As we followed the second floor walkway that winds from the terminal to Central and Wanchai, we passed several hundred Filipina and Indonesian maids, who occupied half the walkway. Like the students students, they sat on flattened cardboard boxes and plastic sheets, chatting, playing cards, and snacking, their umbrellas positioned to protect them from sunlight and rain. In fact, for over three decades, the guest workermaids have been occupying Hong Kong’s elevated walkways and public parks on their one day a week off. Arguably, it’s possible that the maids have taught the students something about how to make oneself at home on concrete.

The protest itself stretches about 6 kilometers. Without the cars, crowds, and noise of an open for business Central, the city’s amazing 3-dimensionality it becomes suddenly apparent. There are overpasses and walkways, underpasses and roads that split and curl into the air. The pristine glass and steel of Honk Kong’s iconic buildings shimmers into mythic forms. In the afternoon small groups of students sat on cardboard or plastic sheets chatting. Some had formed larger groups to listen to and and join conversations about the movement and the importance of securing social justice through civil disobedience. And yes, the reports are true. Hong Kong’s young people have put civility into civil disobedience.

A map of occupied area:

You can learn about the movement, their ideals and tactics at Occupy Central, a blog that keeps one abreast of the situation from a student perspective. You can also download the Chinese manual for peacefully occupying Central, 和平占中 which was published several days before the students began their collective action. As Sedna Popovic and Tori Porell argue in their article over at Slate, it’s the curtesy and non-violence that makes the Hong Kong protests formidable.

In solidarity with the students, impressions of an afternoon of peace and love for Hong Kong:

One thought on “occupy central: impressions”