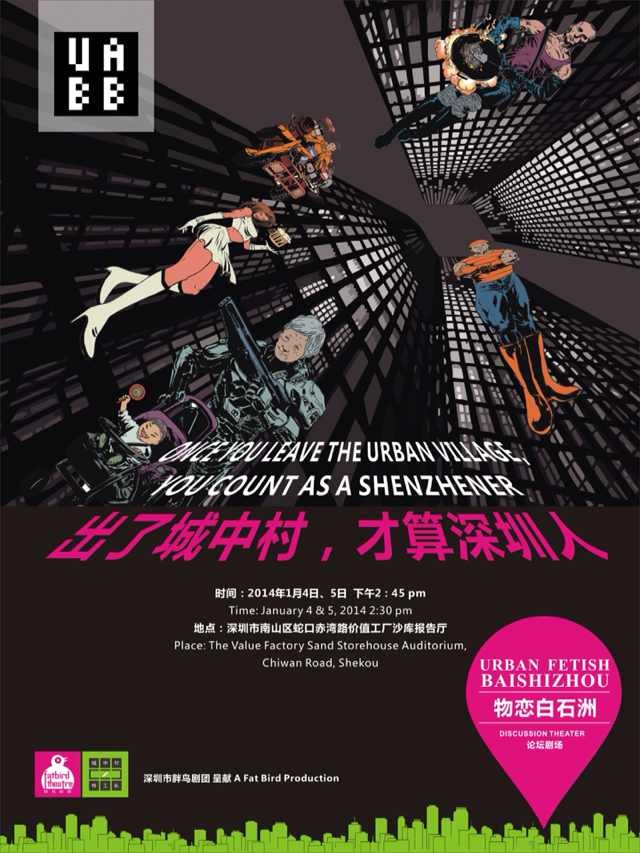 This Saturday and Sunday afternoon at the Value Factory, Fat Bird will perform Urban Fetish / Baishizhou. After the performance, I will lead a discussion about “Life, Labor and Desire” in and around the Shenzhen Dream. The show and discussion begin at 2:30 and will end between 4:30 and 5:00, depending on how lively the discussion gets.

Discussion Theater
URBAN FETISH / BAISHIZHOU
A Historic Interlude that did not, will not and cannot Exist

Sun up; work
Sundown; to rest
Dig well and drink of the water
Dig field; eat of the grain
Imperial power is? and to us what is it?

The fourth; the dimension of stillness.
And the power over wild beasts.
– Canto 47, Ezra Pound

The life that Ezra Pound described was once quite close, with memories only three generations away from the present.

However, today we live in a world where you are what you own. This is a material era, transforming fetishism into poetic theater.

At 2:30 p.m. on the fourth and fifth days of January 2014, during the Fifth Edition of the Shenzhen Hong Kong Bi-City Biennale of Urbanism/ Architecture, in Venue A, Fat Bird Theatre invites each member of the audience to travel to a future Baishizhou. As one of the lucky property owners, you will experience unimaginable luxury from your seat in the theatre. Indeed, this surreal, poetic experience will make your neighbors – homeowners in Portofino, Shenzhen’s most expensive real estate development – envious because their future has already been built. But you are about to create a future that can only belong to you. Compared to them, you are successful.

In the theater, you will see a community buried, and on its ruins a dreamlike city emerge, and you and others like you will own this new world. You will see a place where 140,000 migrant workers once lived. Like you, they came to realize the Shenzhen Dream: wearing designer clothing, luxury housing, and lazy shopping mall days. But you are the lucky one; they have been pushed aside. Compared to them, you are successful.

If this theatrical experience confirms your belief in objects, your desires, and your optimism about the future then you should have no doubts about what you do and will obtain.

The discussion theater Urban Fetish / Baishizhou is a symbolic exploration of architecture and its objects, urban forms and what it means to create an environment. It is a meditation on the meaning of the urban village, a historically specific artifact. It is part of a search to discover the meaning and problems of urbanization.

After the performance, Dr. Mary Ann O’Donnell will lead a discussion with the audience on the topic, “Life, Labor, and Desire”.

One thought on “urban fetish / baishizhou”