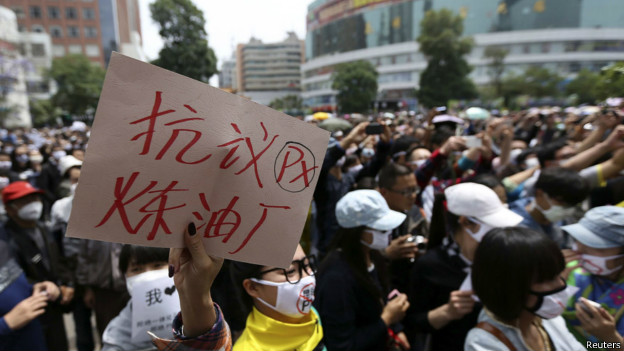 On May 4 this year (more here), Kunming residents wore surgical face masks to protest the construction of a p-xylene factory. In response, the government issued a gentle reminder that clinics, pharmacies, and printers should use the “real name system (实名制)” to complete surgical mask sales and immediately report the transaction to the police. 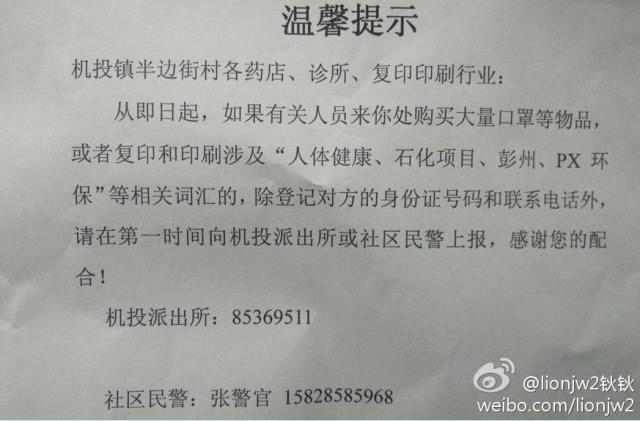 Gentle Reminder to all pharmacies, clinics and printing shops in Bianbanjie Village, Jitou Township: From this day forward, if anyone comes to you to purchase large quatitities of surgical masks or to print any of the phrases “human health, petrochemical project, Pengzhou [proposed factory location], or PX”, please take down their telephone number and identity card number, and then report the transaction to either the Jitou Precint or neighborhood police station. Thank you for your cooperation. Jitou Precint telephone number: 85369511 and neighborhood police officer cell phone number: 15828585968.

Paraxylene is an isomer of xylene, one of the most produced petrochemicals in the United States. In the toxic daisy chain of polymers, xylene is a raw material used to produce terephthalic acid, which is used to manufacture polymers, which are used to make products ranging from pantyhose to take-out containers to baking tins. Paraxylene (or PX as it is being called in Chinese) is the most commonly used isomer in the production of terephthalic acid. The major producers of p-xylene tend to locate factories in poorer regions. One of the world’s largest producers, Chevron Phillips, for example, produces p-xylene at their Pascagoula, Mississippi plant. BP owns the world’s largest single factory in Texas City.

In humans, overexposure to xylene can cause headache, fatigue, dizziness, listlessness, confusion, irritability, gastrointestinal disturbances (nausea and loss of appetite), flushing of the face, and a feeling of increased body heat. Exposure to xylene vapors above recommended exposure limits (100 ppm – TWA) can cause irritation of the eyes, nose and throat as well as tightening of the chest and staggering gait. Severe overexposure to xylene has been reported to cause irregular heartbeat or rapid incoordinate contractions of the heart, tremors, central nervous system depression, and unconsciousness. Lethality has resulted upon exposure to 10,000 ppm. The odor threshold for xylene is reported to be 1 ppm…Aspiration of this product into the lungs can cause chemical pneumonia and can be fatal. Aspiration into the lung can occur while vomiting after ingestion of this product.

The levels of pollution in many Chinese cities have resulted in many residents wearing face masks. There are also reports of face-kinis to protect skin on the beach. To date, however, the Kunming protests and government response have been the most explicit politicization of face masks.