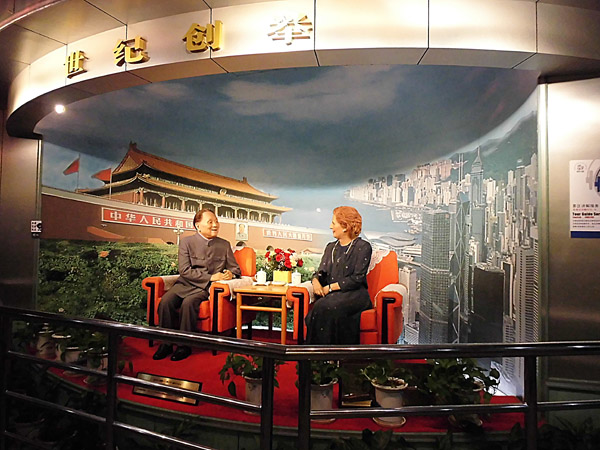 The 69th floor observatory of the Diwang Building remains an important tourist destination, albeit something of a time capsule.

The Diwang building was completed in time to celebrate the Return of Hong Kong to Chinese sovereignty. The 69th floor observatory includes a museum that commemorates Shenzhen’s history from 1980 through 1997, a kitchy “Lan Kwai Fang” bar street, and observation maps that date from 1997. The key exhibit is a wax figure installation of Deng Xiaoping and Margaret Thatcher’s iconic 1984 meeting. The installation symbolizes the ideological function of Shenzhen circa 1997 — the buffer zone between Beijing and Hong Kong, which enabled the PRC to push forward its “one country, two systems” policy.

The juxtaposition of Shenzhen then and now resonates precisely because the interior design of the museum hasn’t changed since 1997. In fact, all one has to do is look at one of the maps and compare it to the view from the observation platform to remember that in 1997 Diwang precipitated the city’s glass and steel makeover. Notably absent from the 1997 maps — the civic center, the kk 100 building, and the Binhai Expressway and Northern Loop. Obviously present in the 1997 maps — the extent to which the construction of border town urban villages such as Caiwuwei, Dengba, and Hubei had shaped urban possibility in Shenzhen . Moreover, in the 1997 images, Buji and the second line seem distant, far far away from the booming border region. Nevertheless, villages still show up in the images below — the relatively dark patches are urban villages, including the remains of Caiwuwei after the construction of the KK 100.

Visiting the museum and observatory costs 80 rmb a ticket and if memory serves (because sometimes it doesn’t), fifteen years ago the price of admission was 80 rmb.