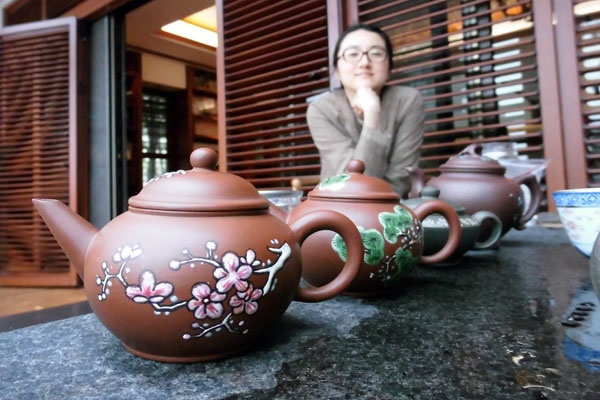 Old Sui makes starkly whimsical woodblock prints the old fashioned modernist way — by hand, alone, and in a studio that is open to friends who drop by for tea and chats. He has collected over 1,000 teapots that when individually shelved and arranged seem oddly menacing. Not a first mind. At first, one sees artistry in the smooth lines and soft glow of each pot. However, as Old Sui opens a drawer to show part of the collection, and then another, and then says that the majority of the collection is elsewhere, the care and time necessary to make and care for a teapot gives way to numbers games and ranking; here are 50+ teapots, here are several dozens, the top  twenty or so have been displayed on a shelf that stretches around the room.

In a room at home.

I know the feeling of insatiable desire. I also enjoy aesthetic displays of objects. But. I am not a collector. Learning that Old Sui has set aside a room for private delectation? The intimacy of this knowledge startles me and my eye settles on a teapot crafted in black clay with flecks of golden sand.

“Ready to go?” Someone calls, breaking my reverie. I grunt.

According to the lunar calendar, yesterday was the 29th, or day before New Year’s Eve. A young colleague invited us over for afternoon tea. She too appreciates fine tea and has been learning from Old Sui the art of selecting, tasting, and preparing tea. So several of us trundled over to her townhouse, where her large balcony has been transformed into a tea room. The table consisted of a large tree root that had been fitted with an iron cover. The tea preparation space was a fine, black stone. Old Sui admired the table, even as my colleague complained that the iron fitting could not be made from one piece.

“The table’s fine,” Old Sui assured Yaguang, “this however…” He pointed to the stoneware she used to boil water, “this could be upgraded.”

My colleague nodded and then confessed, “I was worried about what all of you would think. Last time the tea wasn’t so good. This time, I have 1992 pu’er for us to try.”

Old Sui prepared the tea, rinsing the teapot and cups with boiling water, washing the tea leaves, and then pouring the first round. We sipped and my colleague explained that the first round is never the best. Another friend, who also enjoys good tea added that usually the third round was the best. Old Sui then explained that old tea was special because every pot had a different flavor. Moreover, you could brew pot after pot and it would not become bitter. Instead, even though the flavor would become less strong, it would retain its essential taste.

Old Sui said yes. He noted how old tea filled the entire mouth, and how the aftertaste occupied the entire ridge of the tongue. He then told the following story.

Old tea, he began, can be met, but not sought (可遇不可求).  Some good teas can be bought on the market. Some teas, you can buy young and wait for them to mature, enjoying them years later. However, a person only gets to taste some teas because of fate. Whatever you do or don’t do, the universe brings that pot of tea to your table. Or so I understand the phrase “ke yu bu ke qiu“.

Several years ago, Old Sui continued, I was tasting the tea of a good friend. He brewed a pot of 60-something pu’er. The mellow taste surged from the first to third rounds, held a steady high for the next two rounds, and then gradually gave way to its pure essence. Old Sui asked his friend to “rang (让)”  a jin of the tea, but his friend hesitated. Fellow collectors frequently rang tea to each other, which means sold well below market value. Indeed, the closer the friendship, the closer the price of the tea to cost.

Old Sui laughed and confided to us that when he learned that the tea would be sold for 50,000 a jin to an acquaintance, he knew he couldn’t pursue the matter. We nodded knowingly, if the base price was 15,000 and the acquaintance price 50,000, then just how much could that tea earn at an auction?

So two years ago, one of Old Sui’s friends invited him to go to the Guangzhou Tea Trade Fair. At first, he refused because the Guangzhou convention center is so large that only the physically fit can actually visit all the stalls. What’s more, it’s a given that good tea would be too expensive to consider. However, the friend said he had already arrived at Old Sui’s studio. Old Sui gave in and joined his friend to check out what was on sale at the Fair.

Several hours later, Old Sui was tired and restless. He told his friend to continue visiting different vendors, while he looked for a stall where he could sit, taste, and talk tea. He found a stall owned by a Taiwanese vendor. He sat down and the two men began to chat.

“And we really hit it off,” Old Sui explained. It turned out that this was the vendor’s first trip to the Guangzhou Trade Fair. The teas he gave Old Sui to taste were delicious. And then, Old Sui’s moment came. In fact, the vendor was actually an aficionado, who had bought the tea business over thirty years ago.  The vendor mentioned that at the time, this included teas that were three decades old. Over the course of his business, the vendor-aficionado had slowly drank most of the old tea. However, he had brought a jin of 60 year old Oolong and 1.5 jin of 40 year old Oolong to Guangzhou: would Old Sui like to taste it?

He pointed to the cups of tea he had just carefully poured into our cups, “That was this tea. It’s 60 year old Oolong. I’ve been drinking it pot by pot for the past year and a half. At the time, when I asked the price, I was just curious. But he said that he didn’t know how much because there was no other old tea for sale at the fair. Also, it had been for private use. So when he quoted 40,000 for both teas, I immediately said yes. I didn’t haggle. I just bought the tea.”

We nodded. Some things can only be met, but not sought. A pot of tea. An afternoon with friends. Another year.

May your family thrive, your friends be true, and your enterprises prosper during the Year of the Snake.