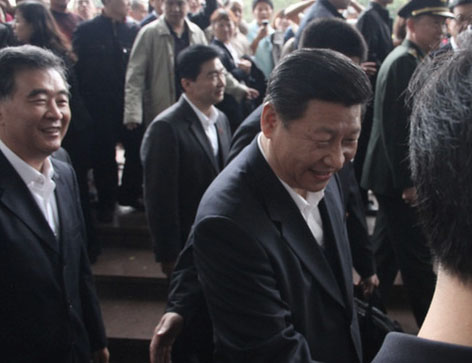 On his first trip out of Beijing, Xi Jinping visited Shenzhen and none of the streets or areas were cordoned off. And he walked the unguarded walk with Wang Yang, proponent of ongoing neoliberal reforms (transparency and ending corruption). Weibo went wild. As the two toured, Shenzhen residents swarmed taking pictures and uploading them to weibo, taking the trip as a sign that Guangdong may be the first Chinese provence to actually take on corruption.

“Anti-corruption” is, of course, the new content of political “reform”. Hence Xi Jinping’s explicit and repeated references to Deng Xiaoping. The trip itself inscribed the cartography of neoliberal reforms that are glossed as the Shenzhen Model, visiting the Qianhai Cooperation Zone and Tengxun’s corporate headquarters — both symbolize Shenzhen’s role emergence as a leader in new forms of international investment and high technology. In addition, Xi Jinping’s southern tour not only celebrated the 20th anniversary of Deng’s 1992 southern tour, but also included a visit to Luohu’s Yumin Village, the village that became famous during Deng’s 1984 tour. And in case anyone missed the point — Deng Xiaoping reformed Maoism, Xi Jinping will reform corrupt practices — Xi Jinping laid a wreath of flowers at Deng’s statue in Lianhua Park.

It is in this context that “no cordons” between the Party Secretary and the Shenzhen People resonated so strongly. One of my friends commented on the weibo posts saying, “If the biggest (老大) is willing to go out unprotected, the rest of them won’t dare to set up cordons!”

“Bah,” was the immediate reply, “He’s an old man, so we’ll give him face. That’s just a question of respect.”

This brief conversation hints at the cultural context of anti-corruption / political reform in China. Both friends were correct. On the face of it, Xi Jinping and new best friend Wang Yang are anti-corruption. Yet, they confront an entrenched power structure that doesn’t retire. All this conjecture matters because many of us are hopeful that Guangdong will be the first province to require corporations and public officials to release financial records to public scrutiny. This is being called “the clean government storm (廉政风暴)”, another reference to the Shekou Model, the Shekou Storm of 1988, when Yuan Geng protected students from investigation by visiting Beijing officials.