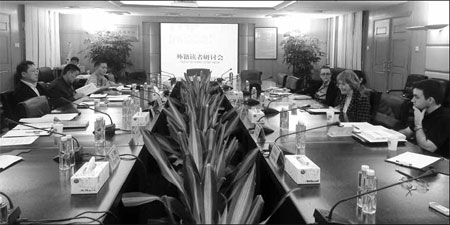 On November 28, I participated in a symposium to celebrate the English language edition of Top Ten Concepts of Shenzhen （深圳十大观念 for Chinese i-pad version）.

The production, organization and publication of the Top Ten have been very Shenzhen, so to speak. The Publishing House of Shenzhen Press Group (深圳报业集团出版社) created an online website, where people could vote for the slogans and campaigns that they though best represent the city’s history. These slogans and campaigns were then re-presented (re-issued?) as concepts that epitomize Shenzhen’s values and way of thinking. Thus, in his preface, Guangdong Provincial Committee Standing Member and Shenzhen Party Secretary, Wang Rong, “[T]he top 10 concepts are the concrete manifestation of the era’s zeitgeist and a vivid imprint of the reform and opening-up program.”

The ideological slippage from political slogans and campaigns to civic values and zeitgeist interests me because it points to Shenzhen’s simultaneously fraught and co-dependent relationship with Beijing. On the one hand, experimentation in Shekou and early Shenzhen legitimated ongoing policy debates in the Chinese capital. On the other hand, the Shenzhen model, specifically and the Guangdong model more generally continue to be at slight odds with the rest of the country. Specifically, Shenzhen continues to advocate a managerial approach to governance, promoting not simply business, but also entrepreneurship and a vibrant grassroots economy.

Two of the slogans did, in fact, challenge prevailing political currents and concomitant power structure. Yuan Geng provided the two most obvious examples — “Time is money, efficiency is life” (1981) and “Empty talk endangers the nation, practical work brings prosperity” (1992). The first was a clear challenge to the Maoist planned economy. The second not only expressed Shekou’s ongoing support of Reform policies, but also the industrial zone’s continued advocacy of talented young people with alternative ideas. The Top Ten discussion of “Empty talk” introduces the history of the Shekou Storm. At the time, Yuan Geng emphasized that while Beijing officials blathered on about ideology, Shekou youth were building the future. The decision to erect the “Empty talk” billboard in the aftermath of the June 4th Incident was especially telling because Shekou actively hired transferred hukou of intellectuals who had been sidelined for their support of students.

Nevertheless, thirty years later, those same slogans uncannily echo neo-liberal values throughout the world. “Time is money” quickly looses its oppositional potential when we remember that in Shenzhen, workers’ wages have not kept up with the price of housing; many white-collar workers are also unable to purchase homes. Likewise, “Empty talk” no longer seems  an effort to protect those with alternative ideas as it does the instruction to “suck it up”. It is therefore unsurprising that concepts 3-10 express the municipality’s ongoing efforts to promote neo-liberal neo-confucianism. More to the point, these concepts clearly resonate with Wang Yang’s call to deepen and extend neo-liberalism not only in Guangdong, but also throughout the rest of China.

I’m thinking that it is thus best to read the Top Ten as a list of double-edged swords. As political campaigns and slogans, the concepts reflect contemporaneous power games. “Shenzhen embraces the world”, for example, was a blatant attempt to justify outrageous spending on the 2011 Universiade, while “You’re a Shenzhener once you come” is the self-serving motto of the Shenzhen Volunteer Association; what exactly does it mean that everyone is a Shenzhener when less than 1/5 of the population has a Shenzhen hukou? However, when understood as exemplars of civic values and a city’s zeitgeist, the concepts illuminate cracks within the power structure and spaces for alternative practices, both in business and everyday life. Indeed, it would be wonderful if these slogans/values might in turn reshape Shenzhen’s neo-liberal juggernaut, creating spaces for legitimate political opposition and open debate on whither the next thirty years of reform.

The top ten concepts are: Time is money, efficiency is life; Empty talk endangers the nation, practical work brings prosperity; Dare to become the world’s first; Reform and innovation are the root and soul of Shenzhen; Let Shenzhen be respected for its enthusiasm for reading; Innovation encouraged and failure tolerated; Fulfilling the cultural rights of citizens; The fragrance of the rose lingers on the hand that gives; Shenzhen embraces the world; and You’re a Shenzhener once you come here.

China Daily and Shenzhen Daily coverage of the symposium online.