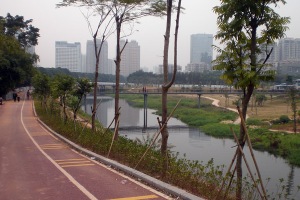 “Feeling stones to cross the river” is one of the more famous sayings of early reform. Western pundits often interpret this phrase as a straight forward description of the uncertainties inherent in reforming the Maoist system and concomitant trepidation about moving toward – what? – xiaokang with capitalist features? However, this expression belongs to a rhetorical form called 歇后语 or two-part analogy, in which the first part is spoken and the speaker’s intended – and often critical – meaning is left unspoken. Paying attention to the unspoken response highlights how conflict and disagreement was handled within Party debate over the direction and scope of reform.

Chen Yun first raised “Feel theory (摸论)” as it became known during a Central Working Conference in December 1980. Importantly, Chen Yun used the two-part analogy to conclude an opinion on how to reform the Maoist apparatus, “…[I]n other words, we need to ‘Feel stones to cross the river’ (也就是要‘摸着石头过河《陈云文选》第3卷第279页)”. In conventional Mandarin, the unspoken critique in this analogy is “tread carefully (步步稳当)”. Later during the Conference, although Deng Xiaoping agreed with Chen’s unvoiced but present call for a more conservative approach to reform and opening, nevertheless, he shifted the discussion by emphasizing pragmatic action.

One thought on “reforming rhetoric 1: 摸论”