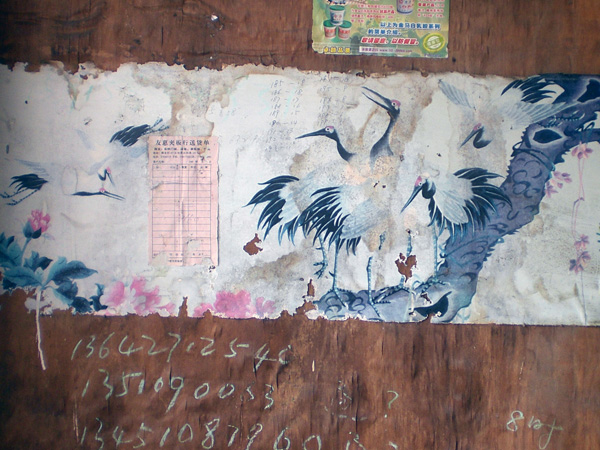 Last week, I met Ye Enling, a 70-something Shiyan native. Mr. Ye worked in Overseas Chinese affairs for over twenty years, and his current interests include calligraphy, linguistics, architectural design, and social philosophy. Of note, Mr. Ye is a Hakka and has devoted much time and energy to promoting Hakka culture by collecting Shiyan mountain songs (石岩山歌), compiling vocabulary lists, recording Shiyan history, and composing essays on diverse topics. In fact, he has published three collections and a book of calligraphy.

Below, I have translated Mr. Ye’s retelling of The White Lady’s Temple on Yangtai Mountain (叶恩麟者《闲雅集》111-2页. Online Chinese versions, here and here). I find the story interesting because it places singing within the sentimental context of gendered yearnings, which continue to shape family life and personal desire. The fact that the story continues to circulate suggests that even if most Chinese professors have opted into modern academics and concomitant specialization, traditional intellectual life and knowledge production may be fading, but are nonetheless still kicking.

I also find the story interesting because when contrasted with Shenzhen’s contemporary arts or traditional culture fairs, the White Lady of Shiyan reveals the extent to which expressive creativity has been alienated from everyday life, an ongoing lament in modernist art. The living presence of this tradition dovetails with the Municipality’s ongoing promotion of Neo-Confucian mores as a strategy of governance. I had tended to think of Neo-Confucianism’s appeal in terms of an invented nostalgia for “good old days” sans hunger, warlords or opium. However, my meeting with Mr. Ye has me thinking that there may actually be a popular basis for Shenzhen’s decision to disseminate Confucian sayings at bus stops and other public places, cultural revolutions notwithstanding.

The actual content of the White Lady story is far more disturbing and has me thinking about structural analogies between the 1920s and contemporary Shenzhen. In Diary of a Madmen, which was published a mere ten years before the white lady’s story is said to have taken place,  Lu Xun gives a chilling representation of human desperation in which the only way to survive is to eat other people; the clearest Lu Xun overlap is, of course, Medicine. Similarly, today, we keep hearing stories of illegal transplants and the shady sourcing of human organs. Less than a hundred years separate workers of the south China diaspora from the neidi migration of workers to Shenzhen. And it seems that rumors of cannibalistic medical treatments continue to emerge out of the experience. Families are fractured, bodies broken, and loved ones vanish.

All Shiyan elders remember that there was once a small temple on Yangtai Mountain and have passed on the following story about it.

In 1928, a Ye family lived in Shiyan Market. The man had gone to Indonesia and not returned. At the time, parents arranged marriages and in his absence he was married to another Ye. A year after their parents had organized the marriage, the wife prepared to go to Indonesia to be united with the husband she had never even seen. But the sea voyage was rough and the road long, and being afraid to travel alone, she looked for a companion. The Ye woman discovered that in another Shiyan village Liguang there was a white woman whose husband was also in Sanbaolong, Indonesia. The white woman was also preparing to join her husband. This white woman had skin the color of kneaded dough, with a hint of pink. No one knew if she had Caucasian blood or a skin disease. After so many years, we no longer know what her surname was or who her people were.

The white woman didn’t have a son and her husband had been overseas for many years. She decided to build a temple on Yangtai Mountain in order to pray for her husband’s safety abroad. While building the temple, she could also stand on the mountaintop and gaze toward Indonesia. It’s obvious how much she yearned for her husband! She said she would do it and she did. The white woman bought a load of bricks. Everyday, she shouldered four bundles of bricks on a carrying pole, and made the difficult trek from Liguang Village up Yangtai Mountain.

Whenever she paused to rest, she sang a mountain song in her beautiful, high-pitched voice, “Older Brother has drifted away on the sea, and hasn’t returned the years; I know the years of time and swallow them whole, no one understands how to open my heart. Standing beneath the mountaintop pines, tears, only tears. I have only one question of Heaven: When will my man return home? (阿哥出洋漂大海，三年五载不回来，线纱打结吞落肚，无人解得崖心开，崖在高山松树下，眼泪汗水落泪花，崖向苍天问句话，崖郎几时转屋家。)

When she reached the peak, she sang in a loud voice, “No one smokes these cigarettes, no seedlings growing in these fields. Younger sister dares climb these roads, younger sister dares view these skies” (无瘾唔食这支烟，无秧唔莳这块田，阿妹敢登这条路，阿妹敢看这重天。)

When the sun set in the west of the mountain, the hope of another day was extinguished. The white lady was deeply saddened and she cried while singing, “From dusk to dawn, I think of you, and my tears endlessly role down my cheeks, they water the mountain grass and drown the people below (黄昏想郎到明天，眼泪滴滴流不停，流到山上草变绿，流到山下浸死人).”

Her melancholy songs reverberated in the mountain valleys, startling birds and causing those who heard to cry. The white lady used her songs to relieve her yearning for her husband, and in this way, day after day, without any help she forced herself to shoulder the burden of bricks, ceramic tiles, lime, sand, and beams and carry them up the mountain. Only after bringing all the necessary materials did she hire a a builder. The temple was finally completed and although it was only several meters big, it brimmed with the white lady’s hard work, blood, sweat, and tears. The white lady also placed a censor and an idol in the temple. The first and fifteenth of every month, she climbed the mountain, undeterred by inclement weather, to pray to the gods and bow to Buddha, saying, “Every 15th or 16th the moon is full, I hope my heart is the same as my husband’s. I pray that the Lord of Heaven protects my husband, insuring that Older Brother makes a fortune (十五十六月光圆，崖同情郎心相连，崖求天公来保佑，保佑阿哥赚大钱).”

The white lady’s story spread throughout Shiyan, her spirit and will-power moving villagers, and many began climbing the mountain to see and burn incense. After many years, this place became rich with incense.

Later, the Ye woman received a letter from her husband saying that she should not go to Indonesia because he was returning to Tang Mountain. Accordingly, the Ye woman changed her plans and the white lady left alone for Indonesia. The white lady’s husband waited for months on the coast, but his wife had vanished without a trace and his heart was aflame with worry. He searched for her and finally got word that his wife suffered from motion sickness on the trip. As she thrashed unconscious, an evil person took advantage of the situation to kill her for her gallbladder because he had heard that white people’s gallbladders could be used for medicine. After removing her organ, he threw her body into the ocean. On hearing what had befallen his wife, the husband was overcome with grief.

To commemorate the white lady, the named the temple she had built “The White Lady’s Temple”. Unfortunately, during the Cultural Revolution, the temple was razed. Nevertheless, the moving love story of a devoted wife continues to be told.