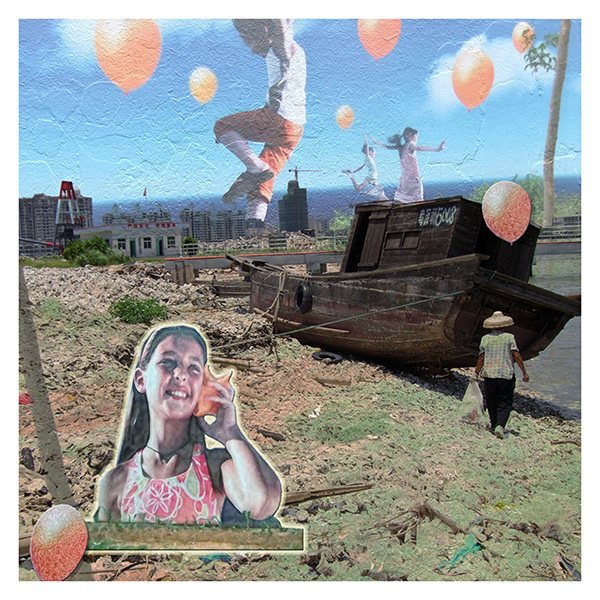 Once you have a house on the beach, what do you do there? You play. And where were the toys once made? In factories built along the old new coastline.

How to have a happy childhood was one of the earliest lessons promulgated in and by and for the Special Zone. Pengzai Tours Shenzhen remains my favorite effort to promote consumption and play. Shenzhen is nicknamed “City of the Roc” (Pengcheng) and thus, “Pengzai” literally means “youth of Shenzhen.” In this series of cartoons, Pengzai guides his parents through Shenzhen, helping them learn what makes the city fun.

In 1984, the year Pengzai made his debut, printing in Bagualing was still aimed primarily at Hong Kong customers and so even Shenzhen Daily used right to left, top to bottom, original character conventions. In this cartoon, Pengzai and his mother enjoy Xili Lake Resort. I still don’t know where the camels are from, but for years people went to Xili to learn horseback riding and wear clubby clothes.

The Pengzai cartoons are remarkable not only for their “youth will lead them” narrative structure, but also because they so obviously stress the importance of high-quality parent-child interaction through consumption. What’s more, they are one of the first examples where we see former means of production being redeployed for play. In an area where most families used boats for oyster farming, fishing, and basic transportation, boating for pleasure was a particularly striking image. These cartoons were published next to reports on manufacturing in the city, including manufacturing in toy factories, which were once common throughout the inner districts. Cabbage patch dolls, for example, were once manufactured in Shekou.

Caption reads: cloth dolls produced at the Shekou Kaida factory for sale in the American market. In the picture, workers are discussing their experience on the assembly line.

Indeed, in Shenzhen, the commodification of childhood has been an important component of the city’s production of a globally recognizable middle class. If we look at the transformation of the cultural geography of Overseas Chinese Town (OCT), we not only see the deskilling of manufacturing that accompanied the Township and Village industries that were the basis of this boom, but also how quickly the formal economy represented itself (and became) postindustrial.

In 1985, the OCT was designated in 1985 for light industry, but in its 1990 plan, the corporate holding was already building Shenzhen’s second generation of theme parks for the families that had already learned how to play. In June 1994, when OCT opened Window of the World, manufacturing was still the dominant sector in the city’s economy. In 2005, the year Shenzhen promulgated its creative industries policy, the OCT was the site of the first biennale of urbanism and architecture. A key feature of this biennial was creative occupation of factories in order to explore and model what a post-manufacturing economy might be.

Then, in Jun 2014, OCT  opened first My Rules, a theme park for children to play at jobs that have been outsourced from the formal economy. My Rules parks were available in malls in eight Chinese cities, while most corporate collaborators are Shenzhen firms or state owned enterprises. Images from a Dongguan My Rules suggest how even the city’s infamous 1990s nightlife scene might be repackaged for a happy childhood.

Although a happy and productive and relevant childhood remains one of the most sought after states of being in Shenzhen, nevertheless, it is important to keep in mind how the intensification of childhood consumption has not actually ameliorated problems of teenage work in the city.

On the one hand, for families with Shenzhen hukou there is resigned acceptance that the horrors of preparing to sit the gaokao are inevitable in China, which still tightly controls educational resources, including number of schools and the content they teach. Recently, for example, there has been increasing pressure to control access to international schools for Chinese passport holders. Most students who sit the gaokao in Shenzhen, including non-Shenzhen hukou holders realize that they will probably end up attending university in the city because of the competition for out-of-city applicants to get into top schools in Beijing, Shanghai, and Guangzhou excludes everyone but the top test-takers.

On the other hand, for families without Shenzhen hukou the way forward is murkier and more fraught because where a student sits the zhongkao (high school entrance exam) has more long-term influence on a life. Out-of-city hukou holders can study in Shenzhen through ninth grade, when they sit for the zhongkao. If they don’t get into one of Shenzhen’s public high schools, then they either must go home and find a high school to attend or start working. The most common choice for working families who want their children to attend high school is to send children  to begin middle school in their legal residence when there are still guaranteed places at pubic schools.

Meanwhile, we still live with the distressing awareness that teenagers leave school to work in factories, restaurants, and construction sites. Over a decade ago, when inner factories were still open and construction sites more extensive, teenage workers were more visible in downtown Shenzhen. As low-end manufacturing and construction have moved into the outer districts, so too have the teenage workers. In other words, visceral awareness that there really are worse alternatives to sitting the gaokao helps to keep people complacent about the system. What’s more, during the gaokao season, the city regularly performs concern for test-takers at great and well-publicized scale. This year, for example, during the two days that the gaokao was held (June 7-8), Shenzhen Metro has set up special (“green light”) lanes for test-takers as well as supply stations, where it is possible to obtain #2 pencils, erasers, water, and energy snacks.

Online impressions from the gaokao chez Shenzhen: students returning home at night, pizza supplied for students who were working through dinner, the participation of the police force in setting up test sites, and a parent and test-taker taking a selfie at the door of the exam site.