These past two days, Zhang Kaiqin led a Handshake 302 art workshop in the Shenzhen Fairy Lake Botanical Garden. The workshop was organized quite simply: on the first morning we learned about the plants and then in the afternoon and next day we created site-specific art. The only rule was that we couldn’t bring anything (except tools) into the botanical garden. And that limitation led to visceral experience of how narrow the actual space for creative subjectivity is in modern spaces.

Although the botanical garden mimics “nature” and is “outside,” nevertheless it functions very much like a museum. There are fixed, concrete trails that lead to specific installations–fossilized trees and dinosaurs, cacti and aquatic plants, orchids, bonsai plants, and the Return of Hong Kong to Chinese sovereignty memorial tree. Indeed, the garden is arranged into six scenic areas–Heaven and Earth,  the Lake, the Temple, the Desert Plants, the Fossil Forest, and the Conifers Azalea that are laid out on Wutong Mountain. As individuals move from site to site, they see the trees and can read labels (if so inclined). They can also rest at a coffee shop, buy treats at a snack shop, burn incense at the temple, and rent a paddle boat at the dock on the lake). 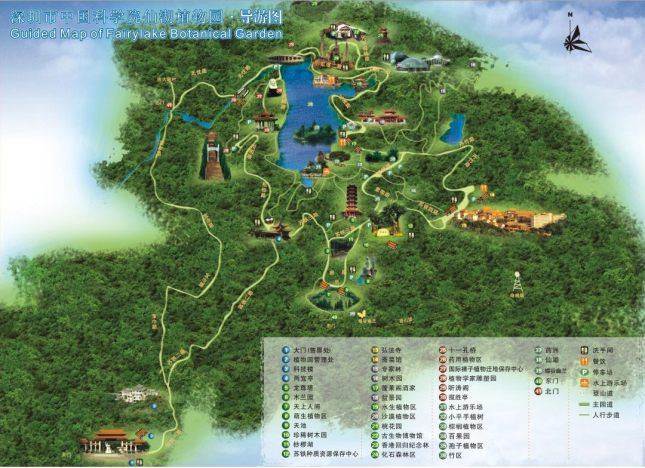 Workshop participants quickly discovered how difficult it was to make site-specific art in this environment because there was nothing to grab hold of. There were rocks and plants and vines and flowers, but we could only look and not touch. Moreover, a team of sanitation workers kept even fallen leaves from accumulating in significant amounts so there was nothing to collect. Indeed, one participant laughingly recounted how she had found some leaves to work with and placed them next to her on the grass. She decided to take a short nap and when she woke up the leaves had already been removed!

The space for intervening in this site was amazingly narrow. Most forms of site-specific art entail some kind of destruction and rearrangement of the environment, but that was not possible here except at a micro-level. One participant used pine needles to block the trail of an ant colony, another placed small colored objects (natural and synthetic) into a dried pod, and another took pictures of discarded objects and wrote short couplets about them. The consensus was that the most appropriate forms of intervention in the space would involve organizing people into photographic tableaus or performance pieces. Documenting plant life through pictures or sketches or watercolors also seemed viable. But to the space itself, we could contribute nothing.

This experience made clear how much in common the botanical garden has with shopping malls and schools, theaters and swimming pools. These modern spaces are designed to facilitate only one active–consumption, learning, watching, and swimming, for example. One goes to these spaces to engage in an expected activity; indeed, in these spaces alternative forms of engagement entail “destruction” and “disobeying the rules.” In turn, the work of the botanical garden employees becomes the organization of activities that might generate unexpected moments of discovery and surprise, moments that are themselves what make a trip anywhere “interesting.”

(In retrospect, this experience has me wondering if the popularity of “performance art” has to do with the recognition that the space for intervening in the world is not only smaller and smaller, but also incredibly idiosyncratic.)

For my part, I brought crochet hooks, scissors, a camera, and a cell phone into the botanical garden. My three projects: tree ears crochets from collected plastic bags, a poem written to commemorate how I dropped my camera into the lake, and an azalea sunburst that I call “good girl” because were were instructed to create three to five works. And so I did.