Shenzhen abruptly arrives at the edge of something new, some palatable, pulsing readiness that has been growing beneath our feet, and launches us into unanticipated desires. Or so it seems today.

December caught me unaware. For those following the city’s burgeoning cultural industry, you already know that “Creative December” has been an ongoing policy to encourage all levels of government and companies to be, well cultural this month. However, you may not be aware how quickly December creativity has expanded and reproduced; there is no time to think, it seems, only the rush to the next event and so I almost missed a few signs of change.

On subway rides across town, for example, I noticed the un-ironic repackaging of former shanzhai entrepreneurs as reliable CEOs. This repackaging is part of a Tianmao branding strategy. Tianmao distinguishes itself from other online stores (like Taobao) by promising to vet all products; Tianmao only sells “real” brands. But Meizu telephones? Didn’t we used to love Meizu because they were ruthlessly open-source, high quality, and cheap?

While giving tours of Baishizhou, I realized that demolition has begun and, unlike previous advertising campaigns, this time the demolition march feels immanent. Shahe Enterprises has cleaned a plot at the eastern entrance into the area where the Shahe supermarket used to stand. Construction will begin in 2016. Meanwhile, at the western edge of Baishizhou, Shahe Road has been widened to allow for the construction of a wall that will surround another construction site; demolitions will also begin next year.

Now even Old Shenzheners, who once upon a time thrived in Shenzhen’s frenzied rush to the future pause and say, “It’s all changing too fast.”

Below, the Tianmao advertising campaign and signs of demolition in Baishizhou. 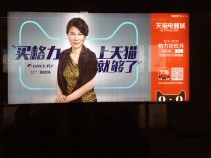 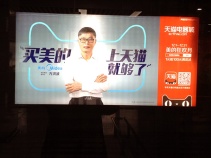