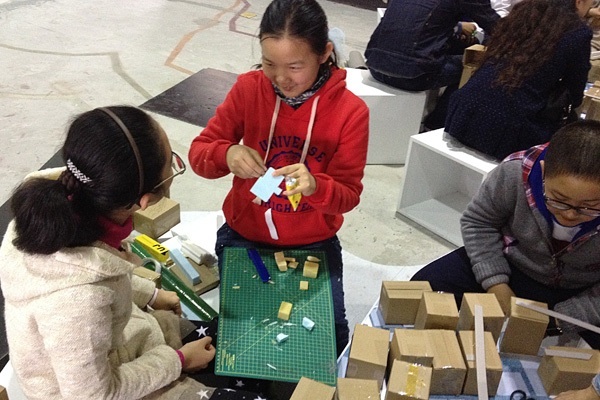 This weekend (Feb 22-23), two events organized for Shenzhen children focused on Baishizhou. On Saturday, ATU/观筑 held a “Young Architects” program in Venue B of the Biennale. On Sunday, CZC Special Forces and Ya Ya Theatre co-produced “Baishizhou Theme Park”, a 20-minute play that was written, directed, and performed by six of Baishizhou’s youngest residents in Venue A.

For the past two years, ATU has run the Young Architects program to teach architectural literacy through experience. They have intervened in the Baishizhou Tangtou row houses, building chairs and also built small spaces to spec, for example, a study room for one person that connects to another, but remains private. Saturday’s program was a urban renewal workshop for Baishizhou. Led by architects, Huang Jingjie and Feng Guochuan, six groups of pre- and teenagers took responsibility for one area. The requirements were, the total building area cannot change and improvements must be affordable so that rents will not increase dramatically. Each group had a professional consultant and 90 minutes to rethink urban renovation.

For over four years, Ya Ya Theatre has developed intimate performances that express unique experiences. Earlier in this year’s Biennale they produced a version of “One Person, One Story” in which members performed autobiographical and biographical monologues about a life-changing event. Lora Wang and Chen Lihua ran the two-month workshop that included exploration of Baishizhou and then developing a series of autobiographical vignettes. Sites visited included a dry swimming fountain, the Jiangnan Department Store plaza, and a video arcade.

So, the during the last official weekend of the Biennale, we had two events that developed the theme of the relationship that Shenzhen children have to Baishizhou, and by extension other urbanized villages. This in itself indicates that interest in the urbanized villages is spreading beyond commercial and academic enclaves. Moreover, we also saw community projects that assume urbanized villages as an important component of Shenzhen as an imagined community. This marks an important shift in the public awareness. Previously, urbanized villages existed outside Shenzhen representations of the city. The villages were (and to a large extent remain) glaringly absent from urban plans. Suddenly, the villages have emerged in public discussions about wither urban development and renewal?

These questions were at the heart of the post performance discussion “Learning from the Urban Villages” with Lora, Feng Guochuan and Zeng Guansheng. Audience members were not only interested in where the working class and young migrants would first settle in Shenzhen, but also in questions about the social value of street life and neighbors. This kind of conversation provided a glimpse into a larger, more general search for Shenzhen identity. This new identity reworks the version of high-speed development and red heroes that has been the previously ignored but not challenged vision of who Shenzheners are and what the city might be.