Several days ago, I walked from Coastal City (海岸城) to Shenzhen Talent Park (深圳人才公园). Previous walks–now long ago and far away, and besides that was a different city–had me wandering the reclaimed land behind Coastal City. However, the new coastline is as firmly in place as anything on shifting sands. What’s more, its a popular destination for families and this popularity deserves comment. After all, people are walking from the old new coastline (at roughly Houhaibin Road) to its newest coastline, a walk that takes at least fifteen minutes one way. Below are images that give a sense of the layout of the new park. In the maps, the purple line is Houhaibin Road, the approximate old new coastline.

Although Shekou is located at the most southern tip of the Nantou peninsula, nevertheless, the peninsula has long served as a “suburbs” of downtown Shenzhen. In the 1980s and 1990s, lychee orchards and industrial parks were located in Nanshan. Subsequently, Nanshan became an important residential area, with commuters heading downtown on Binhai Road or via the metro, which opened on December 28, 2010. And yes, this date is important because the metro and the earliest stages of Talent Park were developed in anticipation of the 2011 Universiade. In turn, 2011 became something of a “before and after” moment in the city’s development. After all the most recent iteration of the Shenzhen coastline is home to some of the country’s–let alone the city’s–high tech companies.

Talent Park opened on November 1, 2017, which is Shenzhen’s now official “talent day,” celebrating the contributions of educated elites to the city’s development. The park itself is lovely. It is also the culmination of at least two decades of planning and re-planning the city, its image, and its aspirations. In fact, you could do worse than to track this history via the city’s retreating coastline. Do you remember when the punchline to coastal real estate jokes was, “we’re going to reclaim a path through Shenzhen Bay directly to Hong Kong”?

Below are images of my walk from the park through its successive coastlines, which highlight changes in building technology, capital accumulation, and understanding of public life. After all, for roughly 1,000 years the Nanshan coastline had been an important center of oyster production. That changed in 2006 (after the final round of land reclamation finished), a year after the city began its shift to innovation and two years after the last rural land had been annexed in the outer districts. 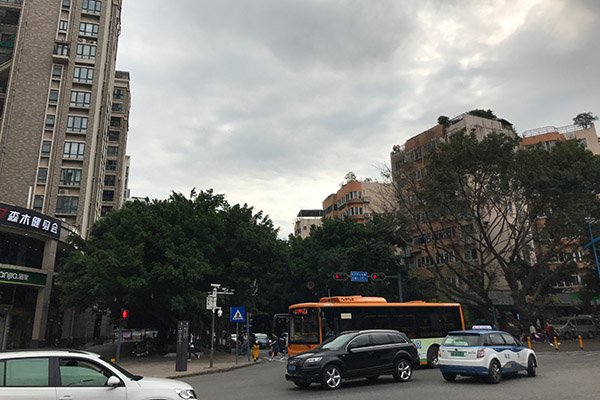 The “original” new coastline, 1990s housing on right, old new coastline housing on left. This is the Haiyue Road / Gongye #8 Road intersection. It was an important boundary until roughly 2012 maybe 2013, when the more expensive housing in the reclaimed area opened up. Note also that early urban planning emphasized narrower streets and instead of a park, shade trees. Moving inland one can walk to various industrial parks, which are now being retrofitted for innovation.