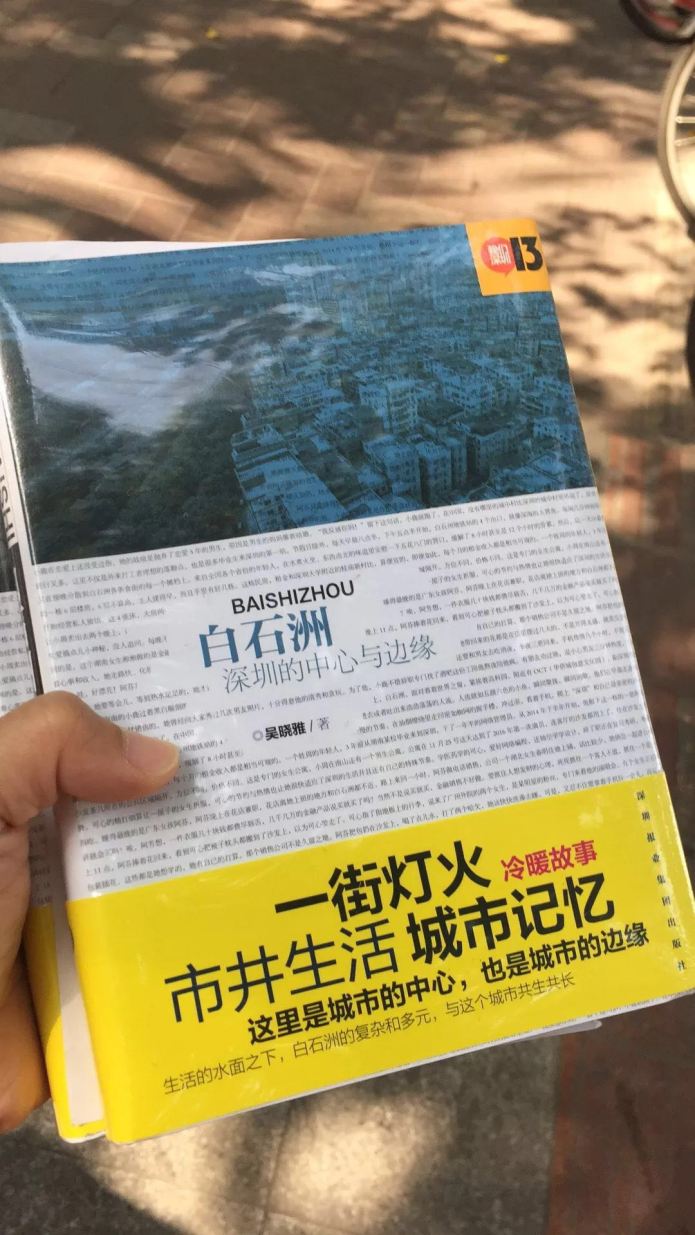 Friday, April 20, 2018, Handshake 302 had the privilege of hosting Wu Xiaoya’s (吴晓雅) sharing about her recently published book, Baishizhou: Shenzhen’s Center and Periphery (白石洲：深圳的中心与边缘。深圳报业集团出版社，2018). Roughly twenty people squeezed into the backroom at Banxian Coffee House, which graciously offered its space for the two-hour event. Of note? The audience comprised a representative sample of the young intellectuals interested in Shenzhen’s urban villages, including recent college graduates who currently live in urban villages, graduate and doctoral students from Shenzhen University, and several second generation Shenzheners who are active in the city’s 公益 scene. We gathered not only to discuss Baishizhou specifically, but also the so-called “urban village phenomenon.”

In part, the increased interest in urban villages seems a result of the Nantou Biennale. This past edition of the Shenzhen-Hong Kong Bi-City biennale of Urbanism\ Architecture (UABB) was held in Nantou. The city’s largest and most influential cultural event not only drew attention to the deep history of Shenzhen’s urban villages, but also highlighted their contribution to the city’s success and meaning for 21st century mega-city urban planning.

In part, the title of Wu Xiaoya’s book points to growing awareness the places like Baishizhou are simultaneously the city’s “center” and its “periphery.” On the one hand, Baishizhou is equidistant from the historic Shenzhen Market in the east and Shekou at the southern tip of the Nantou Peninsula. On the other hand, Baishizhou is the largest remaining urban village in the city’s urban districts and includes architectural traces of the city’s imperial history, the planned economy, and the post 1992 Southern Tour industrial boom.

Indeed, Wu Xiaoya’s book is more a collection of field notes than it is a novel or academic analysis. She narrates Baishizhou through a series of vignettes, introducing the reader to the rich complexity of everyday life. There are recent college graduates and entrepreneurs, local villagers, migrant high school students and their cats, and even a mention of Handshake 302. She documents a year in the life of a changing terrain, helping us to see more clearly what is right in front of our eyes.

Baishizhou is part of the “Our Shenzhen” series of some 200 books commissioned by Baoye Enterprises as the city prepares for the 40th anniversary of it founding, which will be celebrated on August 26, 2020. Indeed, there has been something of a publishing frenzy about things Shenzhen, but the decision to include urban villages as part of “Our Shenzhen” distinguishes the the Baoye series from previous efforts to narrate Shenzhen as a fishing nets to reclaimed riches story. Indeed, “Our Shenzhen” assumes a new common sense about the city. When all is said and done, most residents no longer take the fishing village myth seriously because (a) we know Bao’an County comprised hundreds of fishing villages, (b) Nantou has a history of roughly 1,700 years, and (c) the historic Shenzhen was a market town and not a village.

So what is the new common sense about the city? It is constantly being made and re-made by its ordinary residents.