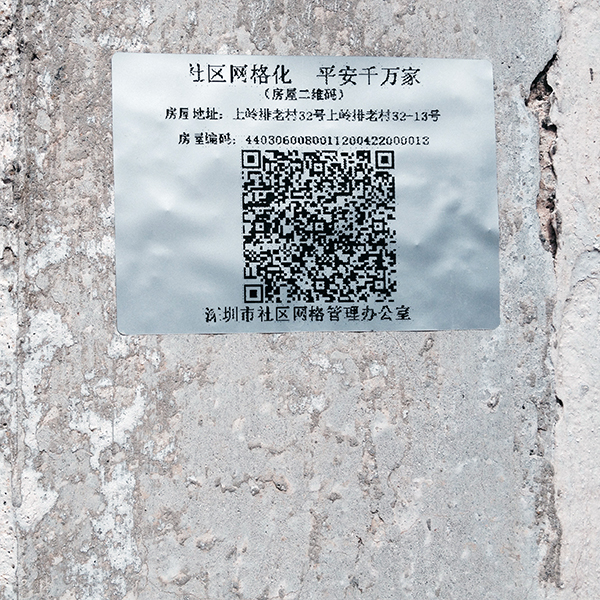 This past week, I toured Shangling Old Village (上岭村) in Dalang. Decaying villages like Shangling contextualize the “what came after” success story that is SHENZHEN! And yet. This contextualization depends upon one, standardized (and quite frankly boring) narrative of rags to riches, sudden wealth, boom boom boom, etcetera etcetera and so forth. Villages like Shangling complicate understanding of Shenzhen’s urban(ized) villages in at least three ways. First, thirty-five years into reform, to have this much old village still in place, even though documented and web-logged, and even with an associated limited village, inc. begs the question: why hasn’t it been demolished and rebuilt? Second, the style, quality and condition of the village remains beg the question: is all that is old valuable and worth the trouble of preservation? And third, the fact the village is still renting these spaces to migrants (at a little over 100 rmb per month) begs two, interrelated questions: just how diverse is the structure of Shenzhen’s urban poor and how does that structure reflect and refract the ruralization of poverty in the PRC?

First, the architectural form of Shangling conforms to urban prejudices (at home in Shenzhen and abroad) of what a village actually is: vernacular in form, low-tech and small-scale. These qualities attract urbanites in search of alternatives to mega-cities and attendant lifestyles–global post-modern, pie-in-the-sky high tech, and so polarized in terms of material wealth that residents often are often unable to see each other as equally human. But neither the fact of rural poverty nor the palpitations of urban desire change the fact that the village remains (in all senses of the world) because some anonymous planner drew an ecological red line and the village fell on the protected side of the line. In other words, this village remains because it is part of a no construction zone. It can’t be rebuilt, it can’t be changed, and if razed, the villages loose their built equity; what’s a government to do?

Second, Shangling is a mountain Hakka settlement, which historically has meant poor, isolated, and always in need of repair (even before Reform opened the area and Revolution redefined village collectivities). Many Hakkas currently work in the Dalang government. I visited with two Hakka leaders, one from rural Huizhou and the other from Meizhou. Huizhou and especially Meizhou are traditional Hakka centers, where the accumulation of wealth resulted in the construction of family compounds that integrated members of ancient lineages. Both Hakka leaders saw commonalities in Shangling, but neither saw elite examples of their common culture. The fact that Shangling can’t be renovated through current programs (demolish, forced evictions, and rebuilding) means that the government is being forced to find a way of improving living conditions that conforms both to current environmental laws and fulfills its obligations to Shangling’s villagers (who technically aren’t villagers, but, are. Actually.) They are looking to forms of historical and cultural preservation to solve the conundrum (what’s a government to do?) but none of the Hakka in charge of culture actually think its a site worth preserving (even if outsiders don’t recognize class differences within Hakka settlements).

Third, Dalang remains one of Shenzhen’s primarily industrial street offices. It has only three housing developments, all that are located near the subway line. Beyond that line, Dalang is factories and workers. Demographics estimate 8,000 locals and 500,000 migrant workers, most of whom live in an urban village. Dalang (like the Baishizhou Tangtou settlement that was condemned in 2014) there are rural migrants who (for various reasons) choose to live in decrepit pre-reform housing because it’s cheap. Indeed, many live in these houses to save money to transform their family homestead (which may resemble Shangling) into something more like an handshake building. Consider also, that for 100 a month, these families have more space than they could have in Baishizhou for 10 or 15 times the cost. As in Baishizhou, there are nearby private elementary and lower middle schools for children. Downside, is that these renters do live outside the Shenzhen dream and it is an open question as to how easily they can transition to a working class lifestyle with the Municipality’s current focus on higher value added industries such as finance, bio-tech, hi-tech, and culture, but especially design.

What’s more, all these questions are further complicated by the fact that Shenzhen Street Office governments have a legal obligation to provide sanitary environments and access to the city electrical and water grid to all villages. Now that inner district and wealthier outer district urban villages have been integrated into Shenzhen’s infrastructure, the time has come for Dalang and poorer street offices to address conditions in urban villages  with the built environment of, well, a village. Indeed, comparison between Shangling and Baishizhou shows up how stratified Shenzhen’s urban poor is. Now consider Shuiwei and Huanggang. They became livable working class neighborhoods through decisions taken when villages could plan themselves, now the responsibility falls upon well-intentioned, yet ill-equipted (and more often than not, emotionally unconnected) officials, whose well-being relies on making sure nothing “bad” happens, even if that also means nothing “good” happens.

The enormity of the challenge embodied by Shangling makes me almost sympathetic to Shenzhen’s officials. Seriously, what’s a government that prides itself on urban planning universal opportunity to do when stuck in amassed contradictions of at least two centuries? How do we dissolve these problems? And simply changing the government won’t change the fact that residents in poor villages want (1) modern living conditions, (2) memories of a past they can be proud of, and (3) an opportunity to move from rural lower class into urban working class with all the dignities promised by modernization dreamings.