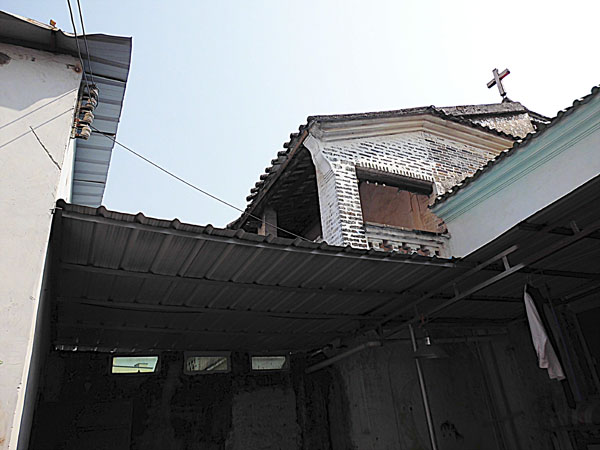 Swedish missionary, Theodore Hamberg arrived in Hong Kong on March 19, 1846. The following year, he joined what became known as the Basel Mission, focusing on converting Hakka communities to Christianity. Indeed, Hamberg was the first to draft a dictionary of Hakka into a western language. Hamberg died in Hong Kong in 1854, however, his efforts to bring the gospel to Hakka people prospered. Located in Langkou Village, Dalang Street, Bao’an District, Shenzhen — and yes, I do enjoy the dense specificity of Chinese place names — the Langkou Gospel Hall (or Church) was built twenty years after Hamberg first arrived in 1866.

The first pastor of the Langkou Gospel Hall was Charles Piton, who served the congregation from 1866 through 1884. The next few years, there was no foreign pastor at the Church. However, in 1891, the German missionary 骆润滋 (and if you know his Western name, please let me know) came to Langkou from the Hong Kong Mission. That same year, the mission also established the “Devout and Chaste” Girls School (虔贞学校), moving from Hong Kong further inland.

During the Mao era, the church and school buildings were used as schools and administrative centers. In 1984, the central government allowed for religious services and the Langkou Gospel Hall reopened as a church. In 2003, the community broke ground to build a new church on neighboring land. The school building was used until 1986 and then abandoned to squatters until recently, when the Dalang Street government decided to restore the school and church as historic buildings. Presumably construction will begin in several months and early next year, the school and former Gospel Hall will reopen as public cultural centers. The Church will continue its mission, including exhibitions that document the history of Christianity in Guangdong generally, but amongst Hakka communities specifically.

Below, impressions of a visit to pre-restored Devout and Chaste Girls School and Langkou Gospel Hall, which is currently occupied by a migrant worker family, who earn their living doing piecework for a nearby factory.

6 thoughts on “the shenzhen gospel”