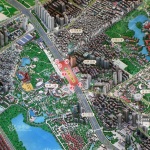 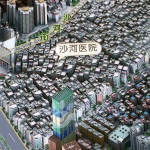 Three pictures of the northeastern corner of Baishizhou along Shennan Road. The map and detail are from a map in the Window of the World subway station, the third is a photo of the actual corner, taken from the plaza in front of 沙河世纪假日广场 (Shahe Century Holiday Plaza), the large landmark in the two maps. The contrast between the map and the territory interests me because it the ongoing (re)imagineering of Baishizhou in particular and Shenzhen more generally.

Baishizhou, as mentioned in earlier posts, is one of Shenzhen’s more “chaotic (乱)” urban villages. However, it occupies prime real estate – directly across from Window of the World and on the Line 1 Subway. Consequently, upgrading Baishizhou is an ongoing project and has included major real estate development. Tellingly, most information about Shahe Century Holiday Plaza real estate (here, here, and here, for example) emphasizes the subway convenience, views of Window of the World, and modern amenities, downplaying and often ignoring the Plaza’s neighbor, Baishizhou.

The map in the subway is an 意图, an “ideal type picture” rather than a 地图 or “land picture”. An “ideal type picture” gives an approximate idea of the neighborhood, with main roads and landmark buildings clearly recognizable and the rest, no so much. If you look closely, you will see that the “ideal type” buildings that have been cloned to create an approximation of Baishizhou are not handshake buildings, but rather short, multi-colored buildings that resemble townhouses and short buildings with glass walls. In fact, the entire area becomes an undifferentiated clump of cloned buildings with no identity other than “urban village” in direct contrast to the named landmarks.

Now, here’s what I’m pondering. The conventional translation of 意图 is intention. When I pointed this out to several Chinese friends, they were shocked that I had focused on the dictionary meaning; the meaning of 意图 was clear in context. Nevertheless, unlike my friends, I find it difficult not to attribute intentionality to the WoW subway station map because what we ignore and whitewash (or cover in blue glass walls, as the case might be) seems to define our identity as much as our landmarks do. Consequently, I wasn’t confident about using “ideal type” as a translation of 意 until I googled 意图地图 and checked out the corresponding maps, where the line between intention and ideal type seems blurred.

And yet. If my friends find my response strange (rather than the difference), it may be that those intentions are as yet inchoate; Shenzhen is renovating urban villages, Baishizhou probably will (within the foreseeable future) be razed and rebuilt, but how and to what ends are open questions. Perhaps an 意图, like an ideal type is productive precisely because it is a vague, unsettling desire for the world to be otherwise.